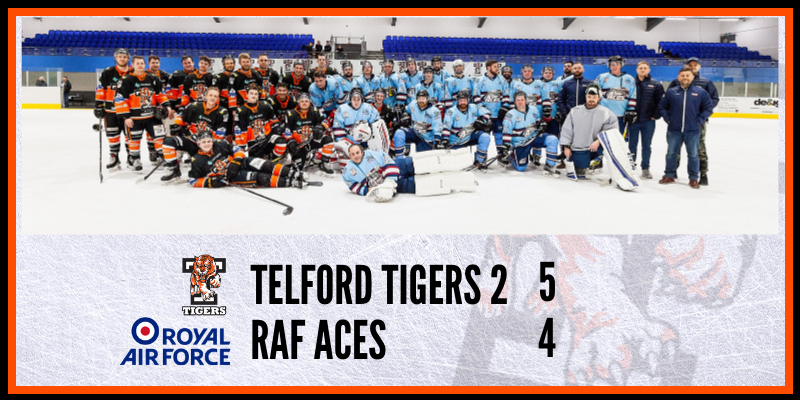 Last month, Telford Tigers 2 were approached by the RAF Aces for a pre-tournament friendly at Telford Ice Rink. The RAF side took on the challenge game as part of a two day camp, in preparation for an overseas visit to Canada where the side are to compete in the CARHA World Cup in March.

The CARHA World Cup takes place every four years in a select Candadian City, attracting participants from all across Canada, the United States, Asia and Europe. It is the largest adult recreational hockey tournament in the world with over 140 teams from 15 different countries.

Despite never playing against each other previously; the Aces put up a good game for Tigers 2 managing to sneak 4 goals into the Tigers net. Though, it was Tigers 2 who came out on top… Goals from Ben Washburn (2), Filip Supa, James Smith and Brodie Jesson sealed the win for the home side with a final score of 5-4.

“It’s always nice to lend a hand where you can within the hockey community so playing the Aces was a welcome challenge to our entire squad. It was a good fast paced game, the aces were very impressive and certainly engaged us in a tough battle! It was really nice for myself and a few of the boys to catch up with an old friend, Adam Rosbottom, from our junior days. We wish them the best of luck in their upcoming tournament and hope they can go all the way.”Everyone at Telford Tigers would like to wish the RAF Aces the best of luck with their journey at the 2020 CARHA World Cup.