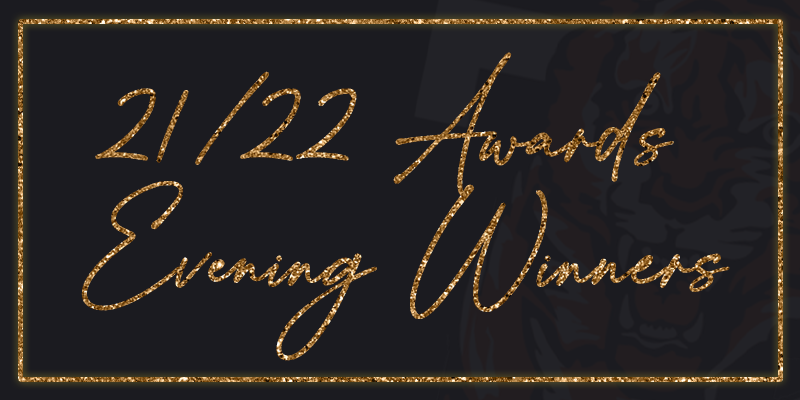 Double league title winning Club Hexagon Telford Tigers signed off the season in style last Friday evening with the 2021/22 end of season awards evening. Players from both teams were awarded with League Champions glassware to mark the Club’s success on Telford Tigers 2 clinching the 2021/22 Laidler League title and the Club’s National side, Telford Tigers 1 securing back to back league winning titles in the NIHL National League. The Club’s match night announcer Shawn Westlake did a grand job in hosting the evening.

There were also awards handed out for the best forward of the year, defenceman of the year, most improved player and most valued player voted by the Telford Tigers fans.

After missing two annual awards evenings as a result of covid, this year’s awards ceremony was held at the Telford AFC where both club and volunteer awards were handed out to the players and those instrumental in not just ensuring that the Telford Tigers managed to put out two teams each and every week but that the on ice and off ice activities were orchestrated like a finely tuned machine.

There was also a very special and poignant moment for the Club at this season’s awards evening. On the 16th May 2021, the Club shared the very sad news of the passing of James Lu. James was a true friend of Telford Tigers, taking on many roles for the Club including commentating, match night announcing and hosting the Telford Tigers podcast.

James was selfless individual who contributed greatly not only to Telford Tigers, but to the wider ice hockey community. During the evening, Telford Tigers Owner and Chairman Mike Washburn had the honour of announcing the special news of the newly renamed ‘Clubman Award’ which will now be known going forward as the James Lu Memorial Award.

The James Lu Memorial Award is presented to individuals for recognising their time, loyalty and dedication to the Club each season. This year, Telford Tigers Owner and Chairman Mike Washburn awarded the James Lu Memorial Award to Club General Manager and Head Coach Tom Watkins in recognition of his outstanding performance and superior dedication to Club and the Club’s two League winning teams.

Mike Washburn Chairman and Tom Watkins General Manager both made eloquent speeches, with lots of thank you’ for the huge list of volunteers who help week in and week out, with everything from providing the team drinks to arranging summer events, away travel, photography, match reports, first aid and match night DJ’s and announcements. A true reflection of a happy club all pulling together to make the Tigers a sustainable success.

Telford Tigers General Manager and Head Coach Tom Watkins commented on the evening saying; “After such a long season and I think our first presentation evening in three years, it was a good to be able to finally celebrate the accomplishments of the club. With National League team having back to back league titles and the Laidler League wining their first league title it was a special evening for both the players and fans. I’m also delighted to pick up the inaugural James Lu Memorial Award in memory of such a fine person and someone who was a Tiger through and through.”

Check out the full gallery of images taken on the night by Steve Brodie below.