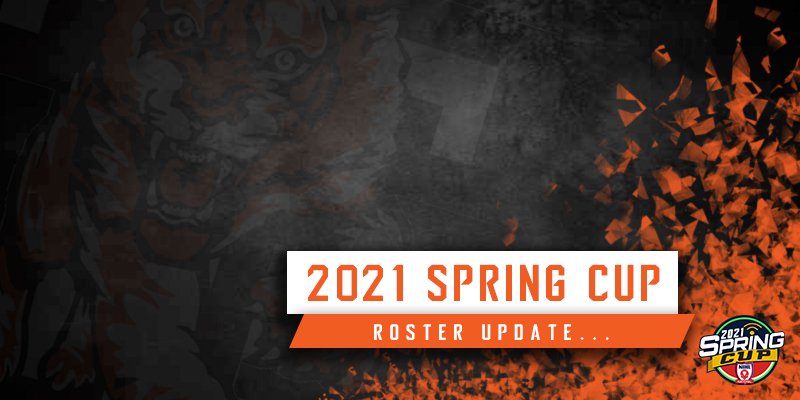 Telford Tigers are pleased to announce changes to their Spring Cup roster ahead of the first games of the competition this weekend. Tigers have added three new players to the roster but also see an existing squad player unable to ice during the cup games.

Thomas McKinnon, a key member of the league and cup winning team from last season, is now unable to play due to personal reasons and the club send Thomas and his family their best wishes.

Joining Tigers for the competition are the following players:

Jones is the brother of former Tigers’ player Adam Jones and is a 23 year old defenseman who was expecting to team up with the Sheffield Steelers before the Elite League campaign was cancelled. Jones is also expected to be fighting for a place in the Great Britain squad that will play in the World Championships later this year.

Shudra, who is 6 foot 2 inches tall and a left handed shot, brings a wealth of experience to the team and the versatility of being able to play as a forward or defenseman. Shudra has spent a number of years in Sheffield and has played for both the Steelers and Steeldogs in his career.

Brown, a 19 year old forward, played for the Sheffield Steeldogs last season scoring 34 points and will bring further attacking options to the team. Brown was originally signed for Leeds Chiefs for the forthcoming season but as the Chiefs are not participating in the Spring Cup, Tigers have been able to secure his services.

Tom Watkins, Head Coach and General Manager, commented, “I’m delighted to add the new players to the roster. All are very exciting players who will add depth to the line-up which I think is key given the short time we have had to prepare for the cup. All three players have a huge amount of talent. Offensively, the addition of Kieran Brown adds scoring punch. He’s an explosive player who has an excellent scoring touch. Cole comes with the ability to play as a forward or in defense which is great from my point of view but we will be utilising him on the D core. Most recently he was playing in Sweden which will have exposed him to a different style of game over there and this will be great for his long term development. In Cole, I think we are going to get a very solid D man at both ends of the rink. Sam joins us in preparation for what will hopefully be a successful run at the Great Britain squad for the World Championships. He’s a player who skates exceptionally well, has great poise and control on the puck and for a D man will put up numbers. We’re grateful for the support of the Sheffield Steelers in making this signing possible.”

Watkins also stated, “I want to clarify the position regarding a few players that were sadly unable to join us for the Spring Cup but are hopefully very much a part of this club moving forward. All were given the opportunity to play but with logistical issues, work commitments, and of course putting safety and their families first ahead of a few weeks of hockey, we fully respect each individual’s personal situation and the decision they made.”

Watch out for further details about the Spring Cup games at Telford Tigers, visit: https://www.telfordtigers.net/news or catch up on Facebook or Twitter.