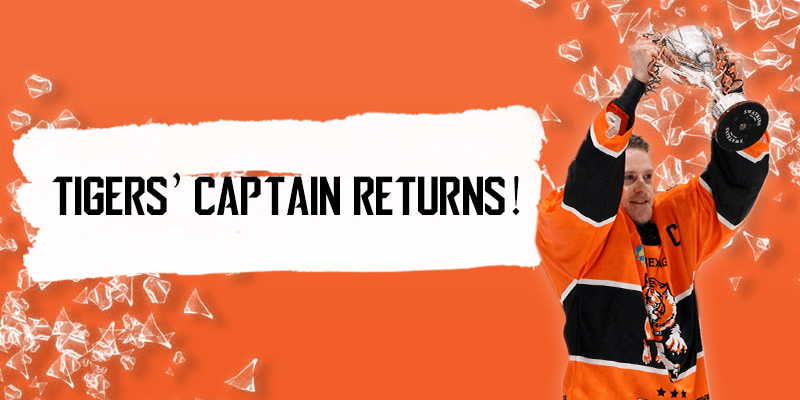 Telford Tigers are delighted to announce the return of club captain Jason Silverthorn for the 2020/21 season. Silverthorn will return for his seventh year with the Tigers and will wear his familiar number 22 shirt. Silverthorn was captain of the team during last year’s NIHL League and Cup double winning team and was joint top scorer with 33 goals.

Silverthorn commented, “How could I not come back? After the season we had last year and our ability as a group to come back with the challenge of defending 2 titles was something I couldn’t pass up on.  Professionally as a player you couldn’t ask for a bigger task to return to, winning is hard but defending will be even harder.  We have a really good mix of youth and experience as well as a growing core currently on the roster with many of the same faces returning allowing Tommy to make subtle changes to continue to progress the organisation. On a personal level, my family and I were never looking to go elsewhere, we are settled here in Shropshire after moving into our new house at the beginning of November last year and with my wife Lyndsay having firmly established a career in Shrewsbury as well as daughter Madison comfortable in the local school system we couldn’t be happier.  Unfortunately the world has come to a bit of a standstill due to this pandemic which prematurely ended our season last year and a chance at the treble.  Although this was always the right decision, as we are only in the entertainment business, it still leaves that feeling of unfinished business which, once this cloud of uncertainty is lifted, will make way to a rush of excitement to get back after it! Stay Safe & Stay Home!”

Tom Watkins, Head Coach and General Manager, said, “Jason has been our club captain since he arrived in Telford from Hull in 2014 and has had the opportunity to lift the league trophy on three occasions in those six seasons. That is a great achievement. He’s a player who makes my job easy, buys into what we do, sets the standard in his approach and sets an example for the other players with his worth ethic. Jason’s scoring record since he has been here has been incredible and he had another strong season last year. Through January and February last season he was unplayable and scoring goals for fun. I said the same thing at the start of last season, that it was an easy decision to bring Jason back as he is the epitome of what you want from a hockey player, he never gives less than 100% and is an example to the younger players in how to train, how to prepare for games and how to play. He is a massive asset to the club and I’m sure the fans are as delighted as I am that Jason has agreed to return for another season. I look forward to working with him.”

We would also like to thank Acute Pest Control Telford who have agreed to be Jason’s individual sponsor for a further season. Jason’s own and loan shirts are available to order now for £100 each (Home and Away). Please see the Tigers’ Online Shop for details.