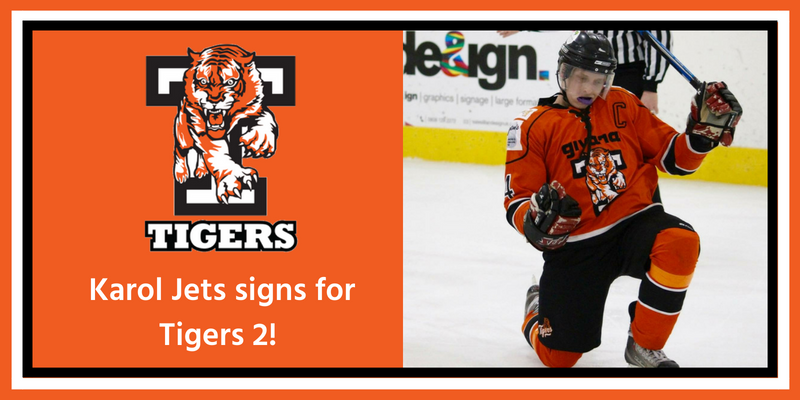 Following the recent announcement of Telford Tigers 2 player coach Bowley returning, the club are pleased to announce the re-signing of Karol Jets. The long serving Telford import has been a fan favourite ever since signing for Telford Tigers in the 2005/06 season. Jets has iced in Telford ever since then, with the exception of one season with local rivals Solihull Barons in the 2006/07 season. The fast approaching 2018/19 season will be the Slovakian’s 13thseason in a Telford jersey.

Karol has been a key component in the Tigers NIHL rosters of the past few seasons, and became the second highest points scorer of the NIHL N2 League last season. Tigers 2 player-coach Callum Bowley commented on Karol’s return saying: “Having an experienced and skilled player like Jetsy back for another season is another incredible signing. For me, he’s a key guy, vastly experienced, on the scoresheet every game, he leads by example and is very consistent at what he does.”

The 37-year-old has consistently racked up both goals and assists throughout his hockey career in Telford, accumulating 117 points in the 2017/18 season; which helped Telford Tigers 2 secure a spot at the NIHL North 2 Play-off weekend in Widnes back in April. Jets proved his successful season by bagging the end of season awards for Tigers 2 best forward and Tigers 2 most valued player, voted for by Telford Tigers supporters.

Bowley added: “He’s also one of the most unselfish players I have ever played with and has plenty of hockey knowledge which can be passed onto the younger players. Jetsy is crucial to our forward line-up and I expect him to carry on from where he left off last season.”

Karol is delighted to be re-signing for Tigers 2 again this season, commenting; “I am confident that we will improve on last season’s performance and take on the challenge for some silverware. I cannot wait for the new season to start!”

Karols’s own and loan shirts are available to order now for £50 each (Home and Away). Please see the own and loan registration page for more details and to register.