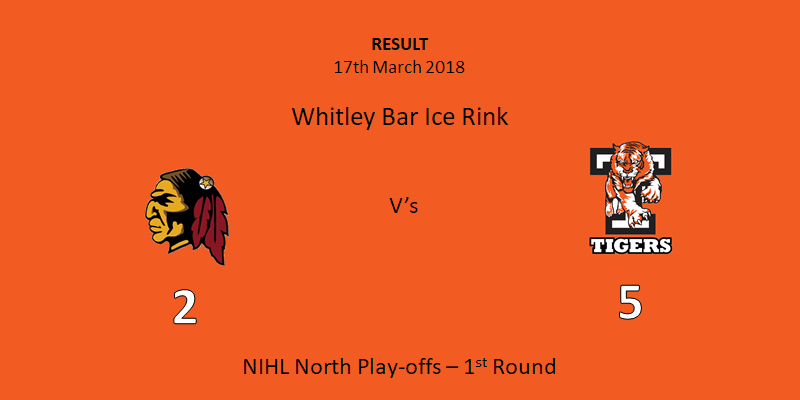 Telford Tigers 1 travelled to Whitley Bay on Saturday night to take on the Warriors in the first leg of the quarter final of the NIHL North playoffs.  Tigers had qualified for the playoffs after finishing in 3rd place in the NIHL Moralee Division and took on 6th placed Whitley for a place in the semi final.

Tigers went into the game without Nick Oliver, Jordan Stokes, Dale White, Jed Moreland, Brodie Jesson and Dan Mitchell but added Tom Watkins and Adam Taylor to the line up.

After a long coach journey, Tigers started brightly and took the lead in the 2nd minute through Adam Taylor.  Tigers continued their good form when, just as a penalty to Macaulay Haywood had expired, Ricky Plant played a perfect pass through the middle of the ice to Jason Silverthorn who made no mistake with a cool finish, to give Tigers a two goal lead at the end of the 1st period.  Tigers took full control of the tie in the 25th minute when Tom Watkins scored the third goal. Shortly after, Silverthorn and Callum Watson had a disagreement which resulted in them dropping the gloves and both getting penalties for fighting.  Tigers scored their 4th goal in the 36th minute through Plant, leaving Tigers with a clear advantage at the end of the 2nd period.

At the start of the 3rd period Whitley finally got on the score sheet through Dean Holland but Tigers struck back with their 5th goal from Jack Watkins. Whitley then pulled a further goal back through Phil Edgar. Tigers were clearly suffering from playing with a short bench towards the end of the game as Whitley pushed hard but could not add to their total, leaving Tigers with a three goal advantage heading into the 2nd leg in Telford on Sunday night.

After the game coach Tom Watkins said, “It was a good win tonight in a tough building to get a result. To be able to take a three goal lead back home certainly gives us that advantage, but we will be resetting for tomorrow and starting again from scratch, one shift, one period at a time.”