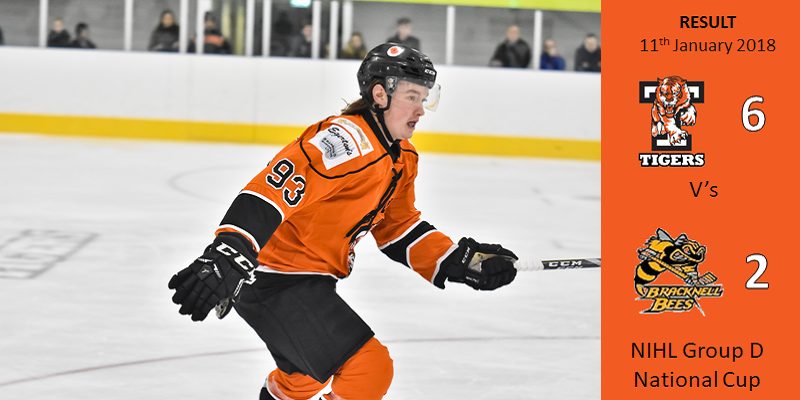 Telford Tigers 1 took on Bracknell Bees in a rearranged NIHL National Cup Group D game on Thursday night at Telford Ice Rink. The game was originally due to be played in December but due to heavy snow in Shropshire the day before the game, it was postponed. Tigers went into the game having already qualified for the quarter finals and beaten Bracknell in all 3 of the previous group games between the 2 teams.

Bracknell struck first in the 5th minute when Tigers’ defence failed to clear the puck despite several chances, leaving Bees’ Danny Ingoldsby to shoot past Tigers’ net minder Dennis Bell. In the 7th minute with Tigers’ Adam Taylor already in the penalty box, a further penalty was called against Tigers, leaving Bracknell with a 5 on 3 power play. However, with only 1 second of the power play gone, referee Hamilton called a penalty against Bracknell for a face off violation. Bracknell’s protests were so vociferous, they received a further penalty for misconduct, cancelling out the power play. Tigers took advantage of this as just as Tigers’ power play was starting, Scott McKenzie sent Jason Silverthorn clear, to level the game with a precise shot past Milton in the Bracknell goal to tie the game at the end of the first period.

Tigers started the 2nd period by conceding a goal in the 22nd minute with a carbon copy of Bracknell’s 1st goal, after failing to clear the puck, Ingoldsby was unmarked to score his 2nd goal of the night. Tigers took advantage of a 5 on 3 power play in the 28th minute, Plant scoring after neat stick work left him a tap in. Tigers took their first lead of the night in the 32nd minute after McKenzie collected his own rebound to score. Just 39 seconds later, Silverthorn fired the puck over Milton’s shoulder to add a 4th goal. Tigers ended the period firmly on top when Corey Goodison’s shot from the blue line flew past Milton to score the 5th goal.

Both teams changed net minder at the start of the 3rd period with Mettam going in goal for Bracknell and Armstrong for Tigers. Just 45 seconds into the period, Jack Watkins fired home with a powerful wrist shot which gave Mettam no chance, to increase Tigers lead to 6-2. Tigers ended the game with a 5 on 3 power play after Bracknell’s Josh Martin was given a second 10 minute misconduct penalty and ejected from the game. Despite the 2 man advantage, Tigers could not add to the scoresheet.

Man of the match – Jack Watkins.

After the game Coach Tom Watkins said, “It was a solid performance to come from behind twice and win by four goals. Our special teams were very good with our power play operating at 50% success rate and our penalty kill at 100% success rate. The game changed in a short space of time and we were able to capitalise quickly on a couple of chances. Watkins added, “It was good preparation for what will be a tough weekend on the road.”