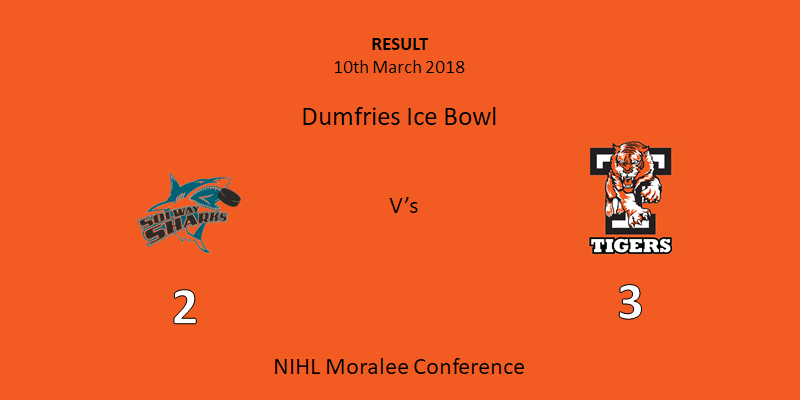 Telford Tigers 1 took their final NIHL Moralee Division road trip of the league season to Scotland to take on the Solway Sharks at Dumfries Ice Bowl.  Tigers had already been confirmed as finishing in third place in the league and were looking to finish the season on a high ahead of the NIHL play offs which are due to start next week.  Tigers’ previous visit to Dumfries had resulted in an 3-0 win.

Just 24 seconds into the 2nd period, Tigers scored their 3rd goal with Silverthorn scoring his 42nd goal of the season after being sent clear by Plant.

Solway worked hard to get back in the game and were rewarded with their 2nd goal in the 57th minute from James Hutchinson to set up a frantic finish. Solway pulled Henderson for the final minute of the game to add an extra attacker, but could not get the goal they needed to send the game to overtime.

Man of the match – Denis Bell.

After the game coach Tom Watkins said, “ It was a long journey but a pretty solid performance with the second period being our best.  Sometimes we need to be more direct and I would have liked to have more of a cushion going into the 3rd period.” Watkins added, “It was important tonight that we focused on doing the little things well, in preparation for the playoffs next week.”