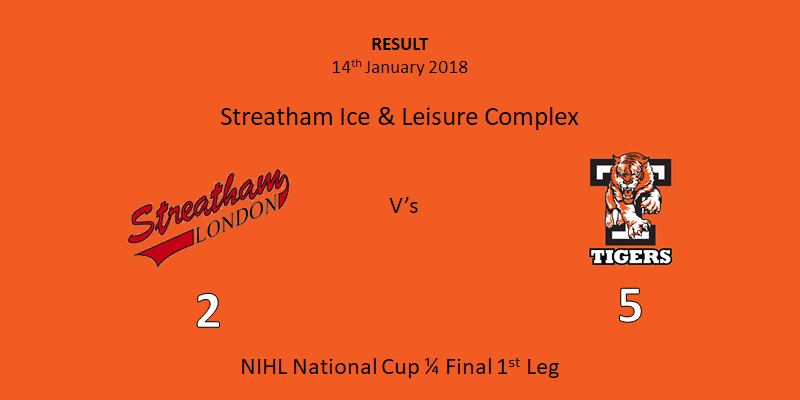 Telford Tigers 1 played the 1st leg of the NIHL National Cup Quarter Final away against Streatham on Sunday night.  Tigers had lost a close fought battle against local rivals Solihull Barons on Saturday night and had also lost Jack Watkins to injury, with the forward suffering a broken collar bone during the game.

Tigers struck first after 18 minutes when Jonathan Weaver scored with a powerful slap shot from a Corey Goodison pass to give Tigers the lead at the end of the 1st period. Tigers scored their second goal in the 27th minute through Jason Silverthorn but Streatham responded with a goal a minute later from Aidan Doughty, to leave Tigers with a narrow 2-1 lead at the end of the 2nd period.

Tigers conceded a second goal in the 47th minute when Webb tipped a Jordan Gregory shot past Tigers’ net minder Dennis Bell to level the game. Less than a minute later Ricky Plant restored the lead and that goal was closely followed by a terrific goal from Brodie Jesson to give Tigers a 4-2 lead. New signing Filip Supa then scored his 1st goal for the club in the 56th minute, to give Tigers a 5th goal and a 3 goal aggregate lead going into the 2nd leg next week.

Man of the match-Jason Silverthorn

After the game Coach Tom Watkins said,” It was a good result on the road after 3 games in 4 days and a long journey. I was pleased to come away with a 3 goal advantage into next Saturdays home leg. We scored some big goals in the third, after Streatham had tied the game, from Ricky, Brodie and a first goal for the club by Filip.

Watkins added, “Jack Watkins was unavailable today after breaking his collarbone in Solihull last night so we had to rejig the lines for today’s game.”