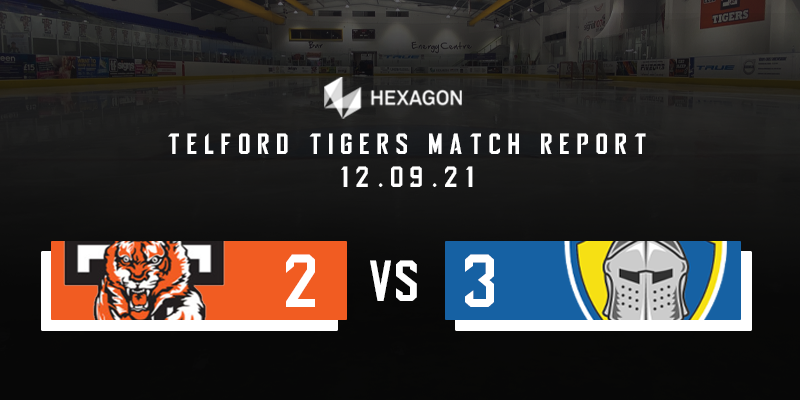 Tigers’ Late Fightback in Vain. Hexagon Telford Tigers lined up on Sunday night for the final game of their pre-season matches with a home game against Leeds Knights. The Knights, who recently changed their name from Leeds Chiefs, were icing a number of recent Tigers’ players – Brandon Whistle, Ross Kennedy, netminder Sam Gospel, Sam Zajac, Cole Shudra and Kieran Brown.

Tigers started strongly from the first whistle and Gospel in the Leeds’ goal had to react smartly to prevent a goal from Ricky Plant. This would prove to be the pattern of the first period for Tigers with Gospel making save after save to prevent his former team from scoring. First, Austin Mitchell-King was denied, followed by Hopkins and then a point-blank stop from a Scott McKenzie shot. Despite Tigers early pressure, it would be the Yorkshire team that would end the period ahead. Tigers’ defence caught out with a Leeds breakaway led by Shudra and Adam Barnes, with Shudra rifling in a shot off the bar and into the net beating Lawday to open the scoring. The Tigers’ deficit could have been more as Whistle struck the post late in the period.

Leeds started the second period with a lot of possession and took advantage of a power play to extend their lead. Andy McKinney was serving a tripping penalty when Matty Davies was given a free shot at goal and he hit a wrist shot low past Lawday to double the Knights’ lead. Leeds continued to pressure the Tigers’ goal and should have scored a third but an inexplicable miss by Whistle, shooting well wide of an open goal, kept the lead at two.  Tigers finally got on the scoresheet halfway through the second period. After good pressure by Deakan Fielder, forcing the puck on goal, Dan Mitchell scored from close range to halve the deficit.  Whistle continued to be a threat, hitting the bar with a rising wrist shot. Tigers were indebted to Lawday for keeping the score at 2-1 as the Tigers’ netminder made a magnificent pad save from a Lewis Houston shot.

Early in the third period, Leeds added a third goal. Kieran Brown knocking the puck out of the air with his stick and gaining a fortuitous bounce as the puck landed perfectly in front of him allowing him to tap the puck home. After some discussion over whether the puck was hit with a high stick, the officials awarded the goal. The Hexagon Tigers had a glorious chance to close the gap with a 5-on-3 power play after Whistle and Jordan Griffin were serving penalties. Despite the two-man advantage, Tigers could not get past Gospel and wasted the chance.

The Tigers then gave the fans hope of a comeback with a late goal from Andy McKinney.  Fin Howells found McKinney behind the net and the Tigers’ forward sent a wrap-around shot in off Gospel’s pads and into the roof of the net.

Lawday was pulled from the net for the final minute of the game but despite Tigers’ pressure, the equalising goal could not be found.

Tigers’ season starts next weekend with a trip to Swindon Wildcats on Saturday (18th) and a home game against Basingstoke Bison on Sunday (19th) with face off at 6 pm.

Man of the match: Deakan Fielder.

After the game Head Coach, Tom Watkins, commented, “It was a pleasure to be back playing at home and great to see so many fans and friends in the rink. We felt the pace during the game and made some tired plays and it was evident where Leeds are as a team in terms of fitness and game time as they are a few weeks ahead of us.
The team worked hard and stuck at it and as with the game in Sheffield on Saturday, I felt the third period was our best.
It’s very early days and as they say, Rome wasn’t built in a day, but it was just good to be able to play again in front of our fans.”