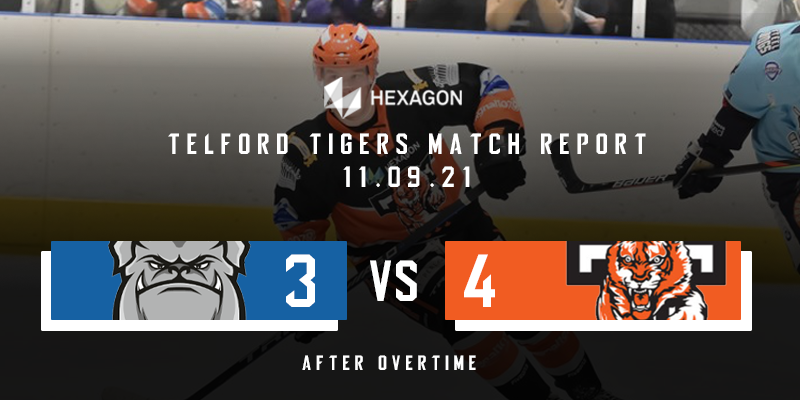 Hexagon Telford Tigers played their first game of the pre-season at Ice Sheffield against the Sheffield Steeldogs.

The Hexagon Telford Tigers were missing Jack Hopkins and Jack Watkins but iced a strong lineup with Brad Day starting in the net.

Despite the lengthy absence of competitive hockey in the last 18 months, Tigers started the stronger of the two teams and dominated much of the possession in the first half of the first period. Nine minutes into the game, Tigers gained an ideal opportunity to take the lead when given a power play after Sheffield’s Charlie Thompson took a needless roughing penalty. Early in the man advantage, however, Tigers got caught out with a breakaway by Brady Doxey who shot low past Day to give Sheffield the lead with a short-handed goal.

Tigers fired back with an equaliser in the 15th minute. Ricky Plant created a chance which was saved by Dimitri Zimozdra in the Sheffield goal but Tigers recycled the puck behind the goal and Plant’s pass found the unmarked Scott McKenzie in the slot. The Tigers’ forward buried a wrist shot past Zimozdra to draw the sides level.

Within 11 seconds of the restart, Sheffield were back in front. Sam Towner skating in on Day and sending a backhanded wrist shot low into the bottom corner.

Tigers fought back with a late goal to deservedly end the period level. Plant once again the creator with a shot that caused a goalmouth scramble that saw Jason Silverthorn react first to backhand the puck into the net for Tigers’ second goal.

The second period saw Tigers pick up where they had left off at the end of the first period, on the offensive. Tigers hit the post twice in the opening five minutes but could not add to their score. The only goal of the period came when Tigers’ Dan Mitchell was serving a high sticking penalty, allowing Sheffield’s Jason Hewitt to blast home a one time slap shot from the right circle.

During the third period, it was clear the lack of competitive hockey was affecting both teams, with the pace of the game noticeably dropping. Tigers continued to press ahead for an equaliser and deservedly got level with a second power-play goal of the game. Towner was serving a slashing penalty when despite Zimozdra making two point-blank saves from Silverthorn and Austin Mitchell-King, Plant was able to force the puck in from close range to score Tigers’ third goal.

Tigers’ players’ legs were tiring and they gave up a couple of needless penalties late in the game, requiring Day to bail them out with two terrific saves to force overtime.

After a couple of minutes of end to end overtime action, the Tigers won the game with a breakaway.  Andy McKinney beating Zimozdra with a brilliant finish to seal the victory.

After the game, Head Coach, Tom Watkins, commented “It was good to get that first game under our belt. We had a slow start on sticky ice which made it difficult for both teams to play the puck at times. It is a pleasure to be back playing and to see people in the rink. It’s been such a difficult period of time for everyone so our only focus tonight was to have fun and try to get our legs under us.

The third period was our best, we changed the lines up and looked at some different combinations and pairings which allowed us to win the third period and use 9 forwards in overtime. It was great to see Andy (McKinney) score the winner after he hadn’t played for 18 months.

It’s good to have hockey back, good to be focused again and we are looking forward to our next game now.”