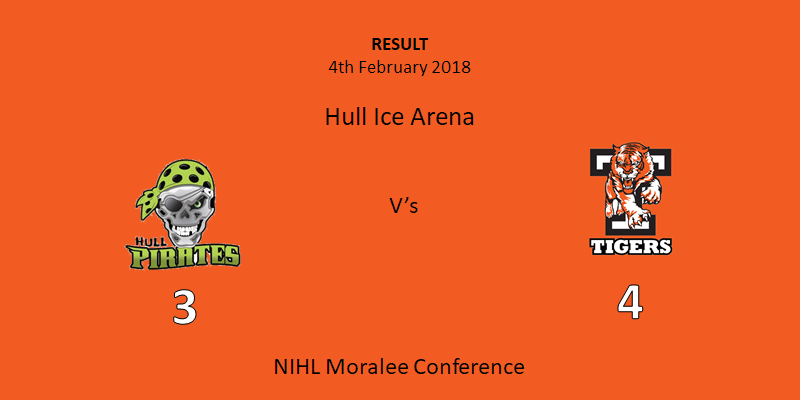 Telford Tigers 1 took a road trip on Sunday night to try and raid Hull Pirates in a vital game at the top of the table. Hull were one point ahead of Tigers and one place ahead at the start of play and also had a game in hand. Tigers had won at home against Blackburn Hawks 9-1 on Saturday night to keep up the pressure on leaders Sheffield Steeldogs.

The game started badly for Tigers with Hull taking the lead in the 2nd minute through Sam Towner. Tigers responded in the perfect manner by equalising in the 5th minute with Corey Goodison scoring from Adam Taylor’s pass. Tigers then took the lead in the 7th minute with Dale White scoring with a powerful shot. A 3rd goal was scored in the 15th minute when Ricky Plant scored from Scott McKenzie’s pass to give the Tigers a 3-1 advantage at the end of the 1st period.

Tigers scored the only goal of the 2nd period in the 32nd minute. Jonathan Weaver firing home from Silverthorn’s pass to give Tigers a 4-1 lead going into the final period.

Tigers were looking to see out the game but conceded a goal in the 42nd minute when Bobby Chamberlain scored for Hull and, just 2 minutes later, Hull added a 3rd goal from former Tigers’ player Matty Davies.  Tigers faced a nail biting last 5 minutes with Hull applying constant pressure on the Tigers’ goal but net minder Dennis Bell and the Tigers’ defence stood tall to see out a nervous last minute and win a crucial 2 points. With Sheffield losing to Whitley Warriors, Tigers return to the top of the NIHL Moralee Division table.

After the game Coach Tom Watkins said, “ It was a huge 2 points on the road and with Sheffield losing it makes it feel a little bigger. We answered back perfectly to their first goal with a couple of our own and won the first period, which took away any momentum from them.” Watkins added, “They’re a dangerous team and they put us on the back foot in the third period but some big blocks in the final moments made a huge difference to the outcome of the game.”