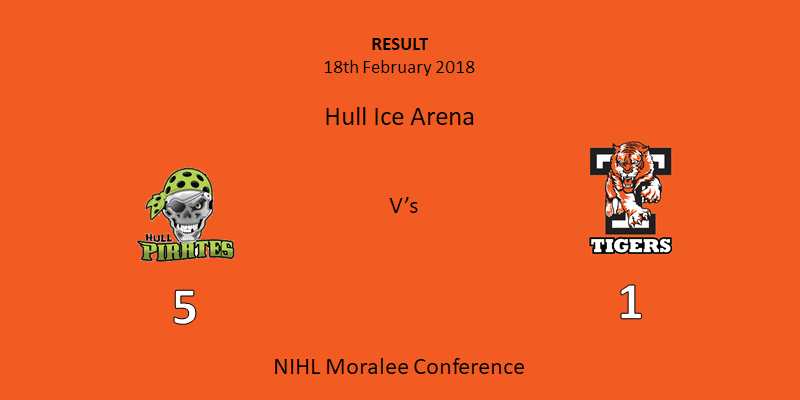 Telford Tigers 1 travelled to Hull on Saturday night for a vital NIHL Moralee Division game. Tigers title hope would rest upon games against Hull and Sheffield and Tigers came into the game after a disappointing home 4-1 loss to the Steeldogs the previous night. Tigers were without the injured Jack Watkins and were also missing Jed Moreland, Dan Mitchell and Brodie Jesson.

A hard fought, tense 1st period was scoreless with just 16 seconds left, but disaster struck for Tigers with Hull’s James Chilcott scoring to break the deadlock. The 2nd period saw both teams having plenty of shots but Tigers could not make the breakthrough and luck was not on their side as Macaulay Halford and Jonathan Weaver both hit the post.

The 3rd period was 5 minutes old when Jonathan Kirk scored for Hull. Tigers responded within a minute when Ricky Plant scored an unassisted goal to halve the deficit.

In the 52nd minute, Halford was given a penalty for tripping which would prove crucial as Bobby Chamberlain scored on the resultant power play to increase Hull’s lead to 3-1. Tigers then conceded a 4th goal just 26 seconds later, with Lee Bonner scoring. Tigers pulled net minder Denis Bell to give them an extra attacker but this only resulted in Hull scoring a 5th goal, Jason Hewitt scoring into the empty net to cap a miserable weekend for Tigers.

Man of the match: Jason Silverthorn