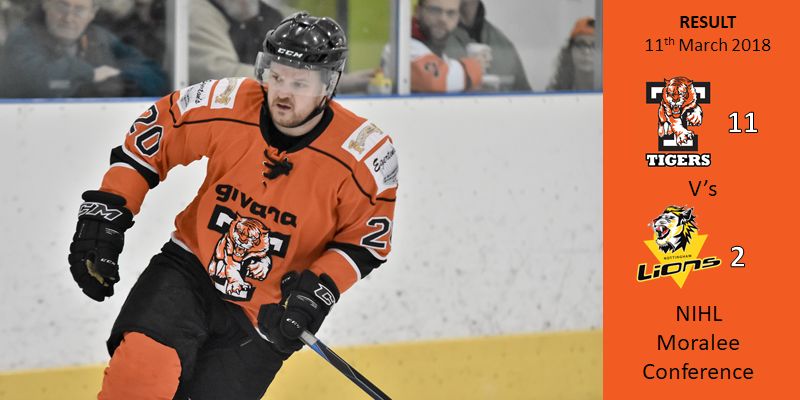 Telford Tigers 1 played their final NIHL Moralee Division league game of the season against Nottingham Lions on Sunday night at Telford Ice Rink. Tigers knew ahead of the game that they had finished 3rd in the league and came into the game having beaten Solway Sharks 3-2 on Saturday night, thanks to Jason Silverthorn’s 2nd period goal.

The team had arrived back in Telford at 2am on Sunday morning after a long journey back from Scotland but showed no signs of tiredness as they opened the scoring in the 2nd minute when Tom Watkins was sent through after neat passing by Jonathan Weaver and Silverthorn. Watkins fired home with a wrist shot that went in off the bar. Tigers added a 2nd goal in the 5th minute, Tom Watkins passed from behind the goal to the unmarked Warren Tait who slammed the puck into the net. Tigers finished the period with a 3rd goal, whilst on the power play. Weaver’s shot from the blue line was tipped in by Ricky Plant.

At the start of the 2nd period Tigers changed their net minder, with Jonah Armstrong replacing Denis Bell.  It was Nottingham’s net minder and former Tigers’ player, Sam Gospel who was the busier throughout the period. Gospel making a fantastic glove save from Silverthorn early on, but shortly after Tigers scored a 4th goal when Corey Goodison’s shot from the left circle flew into the net. Jack Watkins scored the 5th goal with a shot into the top corner. Silverthorn then found the unmarked Scott McKenzie who made no mistake from close range for the 6th goal. The final goal of the period was then scored by Slovakian import Filip Supa, whose shot went through Gospel to give Tigers a 7 goal lead.

Nottingham got on the scoresheet in the 42nd minute through Ruskin Hughes. Tigers hit back with their 8th goal from Silverthorn and shortly after, McKenzie added his 2nd goal of the night after a scramble in the crease left Gospel down and unable to get to the puck. McKenzie then added his hat trick goal to make it 10-1. Tigers scored their 11th in the 54th minute, Goodison scoring his 2nd of the night with a shot through the legs of Gospel. Nottingham scored the final goal of the game in the 56th minute, with Hughes getting his 2nd goal of the night.

Tigers will now face Whitley Warriors over two legs in the quarter finals of the NIHL North playoffs which start next weekend.

Man of the match – Tom Watkins.

After the game coach Tom Watkins said, “Tonight was all about trying to play with some good habits and try to look ahead to the playoffs but in reality it was a little bit of a formality.”

Watkins added, ”It was nice to see Sam Gospel this evening and I was pleased he got the acknowledgment from the Tigers crowd that he deserved. Sam really developed into an excellent net minder for this club and was integral in the teams success over recent seasons. He was very likeable member of our team and it was great to see him hanging out in our dressing room. We had a bit of banter before and during the game. He made some huge stops for them tonight.”