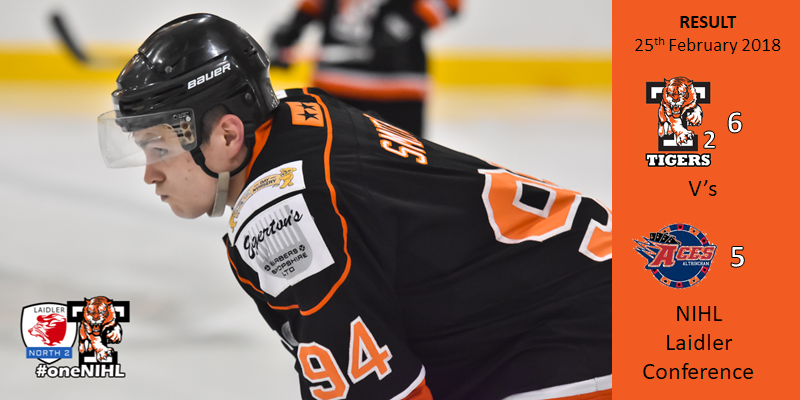 Telford Tigers 2 battled to a 6-5 win over Altrincham Aces and their second win in as many days to complete a 4 point weekend and keep their feint hopes of championship glory alive.

Following a win on Saturday in Sheffield, Tigers 2 were raring to go with their second fixture of the weekend where they were hosts to Altrincham Aces. With the top of the Laidler table looking tight, Tigers 2 are determined to bring home all the points they can to be in for a play-off spot!

The first period got quickly underway with an opening goal from Tigers’ Captain Karol Jets at 5:03. The Aces found themselves 2 goals down within the first 10 minutes of the game after #94 James Smith scored Tigers’ second goal, assisted by #66 Matt Price at 8:54. The Aces battled on to try and get a goal but… Tigers strike again! The third goal of the game came yet again, #4 Karol Jets, assisted by #75 Liam Preece and #23 James Callagher at 12:37. With a three-goal lead, Tigers had complete control of the game until the Aces managed to find the back of the Tigers net at 18:57. The period ended in favour of the Tigers, 3 goals to 1.

The puck dropped for the second period and both teams started struggled to score any goals. With the pressure mounting on as minutes went by, the game started to get gritty and a hooking penalty for #11 Anderton led the Aces to score their second goal of the game at 31:54. The Aces set the tempo and minutes later scored an equalising goal. However, this didn’t scare off the Tigers… less than 20 seconds later, Tigers scored their fourth goal! The period ended Tigers 4, Aces, 3.

The third and final period was crucial for both teams, Aces needed to get another goal for a chance of over time play and Tigers needed to keep the lead! Within only two minutes of the final period, player coach Callum Bowley managed to whizz the puck past Aces’ netminder, assisted by #18 Hustwick and #13 Worthington-Evans. With a two-goal lead, Tigers needed to keep focused to see through with the win. All players started to get gritty and at 49:16 Tigers’ Josh Hustwick and Aces’ Oliver Bayne dropped the gloves which led to both players receiving a 2+2 penalty for fighting. Despite being a man down on the ice, Tigers’ Jets scored the Tigers’ second powerplay goal and their sixth goal of the game at 51:14 assisted by #75 Preece and #91 Hammerton.

With less than 10 minutes remaining in the game, and a two-goal lead for Tigers; the Aces started to pick up the pace again to try and get another goal. Into the final minute of the game and the Aces manage to get in another goal with only 19 seconds left on the clock! Tigers continued to put on the pressure to keep hold of the lead. The sound of the final buzzer went and it was the second win of the weekend for the Tigers!