Tigers 2 back to winning ways! 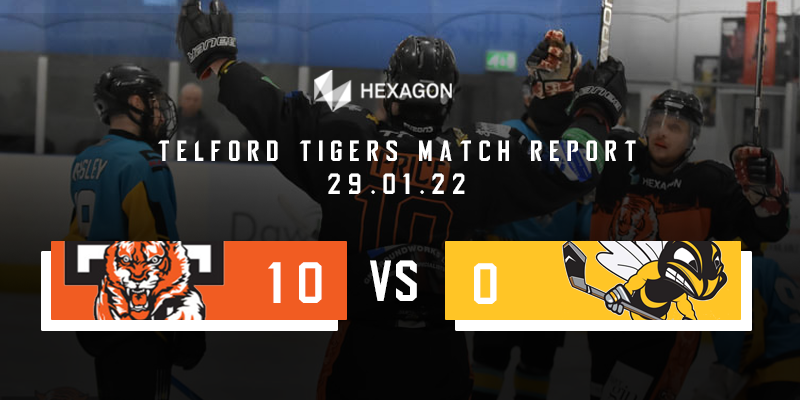 Tigers 2 back to winning ways! Hexagon Telford Tigers 2 welcomed Sutton Sting to Telford Ice Rink in their first game back after the Laidler Cup final defeat against Hull Jets the previous weekend. After a disappointing Cup loss, Tigers were looking to bounce back and return to their winning ways. Previous meetings between the two teams have seen some slim results with the last two clashes ending in Sutton Sting’s favour.

Tigers set the pace of the game from the moment the puck dropped. Sutton found themselves a goal down early on when James Callagher picked up the puck from behind the Sting net, clinically passing through to Filip Supa who tapped the puck into the right-hand corner past Lewis King. Tigers continued to build momentum when Deakin Fielder stepped onto the ice and a little less than 10 seconds later, he netted goal number two for Tigers. The first period ended with Sting trailing by two goals.

It was a ropey start to the second period for Tigers when they ended up with two overlapping penalties early on in the period, giving Sting a two-man advantage. Tigers’ net-minder Brown denied Sting of all chances and the short-handed side killed the Sting powerplay successfully. Tigers reclaimed control of the game and pressed restart on the offensive play button once again. Charlie Webb took a shot, but the puck heads straight for Lewis King in the Sting goal who fumbled the save and could only deflect the puck out of the crease where Ben Washburn picked up the rebound and tapped home the third goal of the game.

The strong Tigers defence core didn’t allow Sting to breakthrough with any dangerous chances and the visitors started to get frustrated.  A misconduct penalty for Jeffcock, gave Tigers a man advantage and a face-off in Sutton’s zone. Oli Hunt won the face off allowing Karol Jets to feed Dan Mitchell across the blueline who then fires the puck into the net with a one-timer shot. Tigers continued to hold their defensive barrier, giving Sting very little chance of scoring. Telford went on to unearth a mass of offensive energy, netting two further goals before the end of the period, both scored by Oli Hunt and assisted by Karol Jets and Lucas Price.

Most would say that by start of the third period with a six-goal deficit, the game was out of reach for Sting and that quickly became reinforced. Just before Tigers went on another goal spree, a neutral ice altercation between a dominant Connor Keyes and Sting’s Cameron Akers led to both players receiving a 5-minute coincidental fighting penalty.

After the dust had settled, Tigers’ youngster Price went on to bag his first senior hattrick all within seven minutes of play, in addition to Karol Jets his securing his sixth consecutive assist of the game. Sting bounced back into play with a breakaway from a Sutton zone face-off, but this was quickly shut down when Bartholomew rocked Cameron Glasby on the Tigers blueline disrupting Sting’s game play.

Now nine goals up and with less than 10 minutes on the clock, Tigers were hungry not only for the win, but for a shutout. A poor Tigers defence pass provided Sting with a hopeful goal opportunity, but it didn’t pay off when Ryan Apsley shot the puck wide of the Tigers net. Sutton were then gifted a man advantage with less than five minutes on the clock after Keyes was given a minor interference penalty, but once again they were unable to capitalise.

With less than a minute to go on the clock, Tigers were cruising their way to a comfortable win, but before the final buzzer sounded, Hunt managed to add to his goal tally with an unassisted hattrick goal taking Tigers into double figures. Tigers held on to a 10-goal shutout and sent Sutton home with a hugely disappointing defeat.

After the game Assistant Coach Dougie Wildman commented: “We’re really happy with Saturday’s result against Sutton, after our last two contests against them have resulting in us coming out as the losing side.

We knew we had to step up for this game and perform like we know we can, we needed to bounce back and put the cup final mistakes behind us. Sutton are a tricky team to play against and their league position proves that with them in the top three.

Overall, we are very pleased with the dominant performance of the team as a whole and we look to build on that going forward into the second half of the season.”

Man of the match: Louis Molyneux