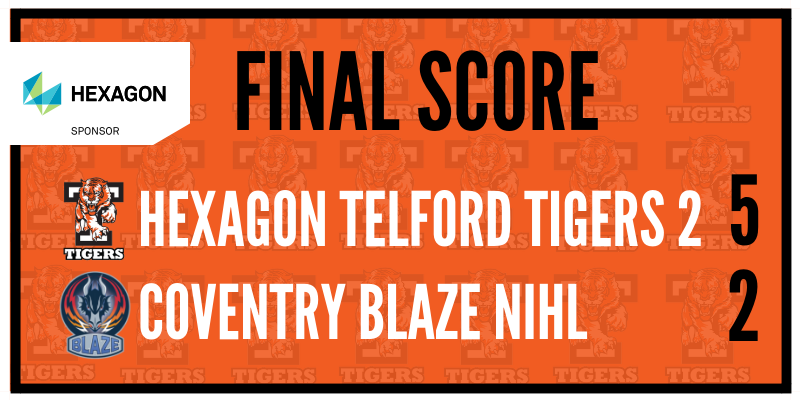 The Tigers came out hard and fast in the first period of the game against Coventry Blaze on Saturday  17th November, #72 Callum Bowley hitting the post after 17 seconds of play, gave us an idea of how much the lads wanted to win this local derby game. The large crowd cheered loudly when #96 Charlie Hammerton found the back of the Blaze net with the first goal 4 minutes into the period.

Some good game play saw #27 Callum Griffin score half way through the period. The Tigers had no penalties during the first but were still unable to produce power play goals when presented with 3 powerplay opportunities. The tigers outshot the blaze and dominated the period ending 2 nil up. The Blaze came out very aggressively at the start of the second scoring a power play goal against the Tigers and pinning us in our own zone. The Tigers found it very difficult to break out for a good few shifts, hard hits from both sides finally saw #66 Matt Price able to score, assisted beautifully with good passing and strong team work by #72 Callum Bowley and #96 Charlie Hammerton. This was then followed up with another goal from #96 Charlie Hammerton. The Period ended with the Tigers 4-1 up.

The third period was real end to end hockey, both sides fought well and put in some strong plays and good hits. #27 Callum Griffin found the back of the net again scoring goal number 5 for the Tigers. A change of net minder came in the third period as #41 Zack Brown changed for #3 Ollie Johnson with just over 4 minutes to go. Avoidable penalties saw the Tigers in Penalty kill for some time enabling the Blaze to get their second Powerplay goal of the night. The Blaze emptied their net for the last 25 seconds of the game, but no more goals were score and the Tigers came through with a convincing 5-2 win over the local rivals.

“We came out really strong in the first and made it very difficult for Coventry. I wanted to make sure we got on the board nice and early so we could put them on the back foot, which is exactly what we did. I thought there were a lot of strong performances on the night and a lot of positives we can take from the game. I have to give credit to Coventry as they made it difficult for us in the third period and they didn’t let us play with the same edge that we had in the first and second. It’s another win and keeps us moving in the right direction, I want to see us play with that tempo at the start of the game for a full 60 minutes and not let teams off the hook.”