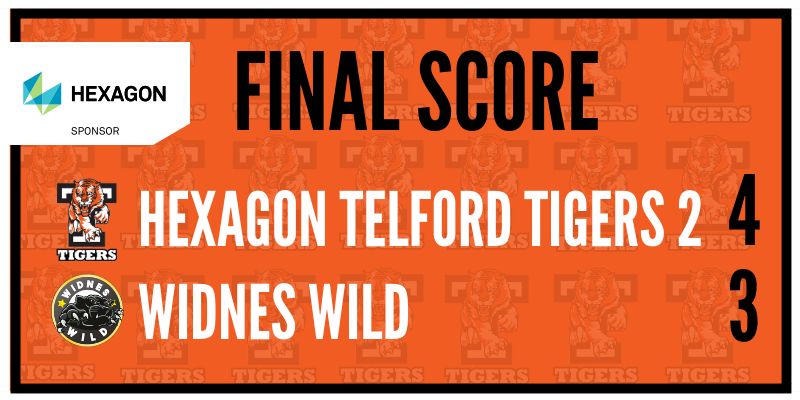 Saturday 26thJanuary saw the Widnes Wild travel to Telford for the second time this season. Both the home and away fans knew that they were in for one heck of a game with the Wild looking to extend their winning streak to 18 games in a row.

The game started as fast as we thought it would, with the Wild finding the back of the net only 27 seconds into the game.  This didn’t rock the Tigers who found the form they had at the start of the season and equalised with a powerplay goal from #94 James Smith after a slashing penalty on the Wild. Both teams battled hard on the ice, the Tigers defended a three on five denying the Wild any powerplay goals resulting in the period ending in the Tigers favour  after #94 James Smith scored his second goal of the period at 13:30.

The second period more edge of the seat end to end hockey, at times both teams made some fantastic passes and every player on the ice had to work hard every shift. Within 5 minutes of the second period, the Tigers increased their lead by two goals after #72 Callum Bowley scored an evenhanded goal, assisted by Smith and Price. The Wild responded only two minutes later when they closed the gap with their second goal of the night at 26:51. At the half way point of the game, Tigers’ Griffin landed himself with a  2+10 minutes misconduct penalty giving the visiting team a 5 on 3 power-play opportunity which they capitalised when they bagged their third, and equalising goal of the game at 31:51. The atmosphere in the rink was so tense it could be cut with a knife, until Tigers’ superstar James Smith opened up the game again with his hat-trick goal at 37:28, which bagged the Tigers a one goal lead to end the period…

The rink was buzzing, with an immense amount of noise coming from the spectator stand as the Telford Tigers 2 and Widnes Wild skated onto the ice for the third and final period. The excitement grew as the third period got underway!  The fans were once again treated to end to end hockey, with the Wild outshooting Tigers 15 shots to 6; but Tigers’ net minder #41 Zack Brown wasn’t letting anything past him whilst he performed some outstanding saves!

It came down to the final minute and Widnes decided to take their time out with only 40 seconds left on the clock. The tension grew as the Wild pulled their net minder for a sixth player… All the action was in the Tigers zone, but the lads kept a cool head and defended well.  Try as they might the Wild could not get that all important goal and the game ended with a 4-3 win for the Tigers, making a break in Wild’s winning streak! When the buzzer went, the Tigers fans raised the roof as they knew them 2 points would put the Tigers second in the league table.

“Tonight I couldn’t fault any of the players, they all put their bodies on the line, worked hard for the team and battled hard to earn two big points. We knew going into the game that we would have to work hard defensively and take away there time and space on the puck, and we did a great job at doing that. Special teams has been an area which has been really good for us of late and we need to keep this momentum going. It’s great performance against the league leaders.”

Telford Tigers 2 bag themselves a weekend of rest next week with no fixtures scheduled in. They will return to home ice on Saturday 9th February where they continue their league campaign against Coventry Blaze who currently sit sixth in the league table.