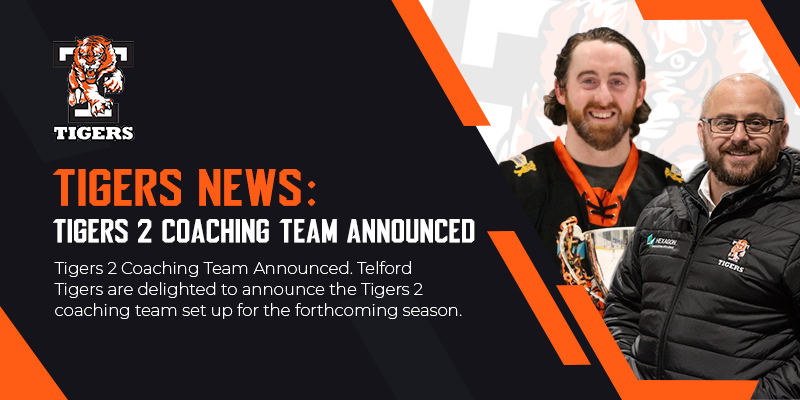 Tigers 2 Coaching Team Announced. Telford Tigers are delighted to announce the Tigers 2 coaching team set up for the forthcoming season. Scott McKenzie will be taking on the role of Tigers 2 Head Coach alongside Doug Wildman who will be Assistant Coach. The 2021/22 season will see the coaching duo work together for the first time. McKenzie will oversee all team matters for the NIHL Division 2 team but will hand over the reins on match days to Doug who will take on the role of bench coach for all games where Scott is playing with the National League team.

Scott commented, “I’m really pleased to become the Tigers D2 Head Coach. I want to make the team competitive in their respective league but also provide an opportunity for some younger players to gain valuable senior hockey experience. Myself, Dougie and Tom will be working closely to make sure we have the right players in the correct situations at all times. I can’t wait to get started!”

Doug commented, “I’m pleased and honoured to be asked to be involved with Tigers again this coming season and I’m looking forward to getting going again with the team back on the ice and hopefully with plenty of supporters in the rink. Scott has been working very hard in securing new signings and is looking to build a very strong side that can challenge for the league. It’s a privilege to work alongside Scott who has so much experience and knowledge of the game and I’m excited to learn more and assist him and the Tigers in every way.”

On the appointment of Scott and Doug, Head Coach, Tom Watkins and Club Chairman Mike Washburn made a joint comment, “We think this coaching route ticks a lot of boxes for us as a club and in Scott and Dougie, we have two very well respected individuals to lead this group. We add the experience and professionalism that Scott can bring to the team, sharing the National League coaching strategy which we believe can help develop the team to play with the same tempo and to develop similar game habits. Scott has a good hockey IQ and we think that he can do a great job sharing that understanding, roles and responsibilities with Dougie and the team. We know Dougie has the communication and leadership skills to take control of game-day responsibilities to bring the best out of the group and we are delighted he is returning for a second season. Together we believe this to be a very positive addition to the club.”