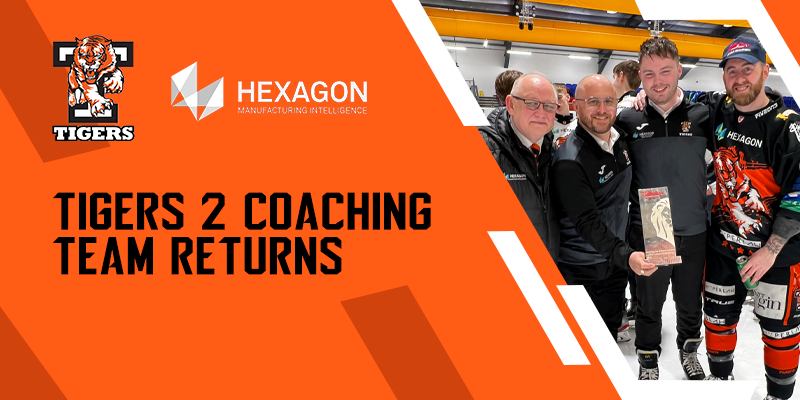 Telford Tigers are delighted to announce the return of Scott McKenzie as Coach of the Teford Tigers 2 team and Dougie Wildman as Assistant Coach for the 2022/23 season.

McKenzie returns for his second year in the role of coach of the team that will play in the Laidler division, with Wildman reprising his role as match day bench coach. The Telford Tigers 2 team won the Laidler league championship last season and the coaching duo will look to continue their success in the forthcoming season.

As a continuation from last season, the Laidler side will once again be supported by Kieran Nickless as Team Manager. Kieran joined the team last season as part of the Telford Tigers 2 management team, assisting with match day logistics and player management.

Commenting on the coaching duo returning, Telford Tigers’ Head Coach Tom Watkins said how great the news is for the club.

“The return of Scott and Dougie as the Laidler coaching team is great news for the club. That familiarity is key to the development of the team in my opinion, which in turn will aid consistency for the players in the team’s coaching philosophy and delivery. They set the bar high last year but with the dedication and passion they showed this last season, I’m confident the team will be highly competitive every night and highly motivated to retain the league title.”

“After last season’s success, it still felt like I had unfinished business with this group of players. Yes, we won the league, but we also came so close to winning two other trophies. I think the players have learnt from these moments and are now ready to become a team that is focused and driven enough to win all trophies available to them. I obviously have a lot of love for Telford Ice Hockey in general, so to be able to give back some knowledge and provide a pathway into National League hockey for some of the players is what it’s all about.

Tom and I have a great working relationship and this allows the pathway to be successful. I’m grateful for the opportunity to carry on in this role and hope that we can build on the success of last year.”

Dougie Wildman, who will be returning for his second year as Telford Tigers bench coach commented;

“I’m very proud and honoured to have been asked to assist Scott McKenzie again in coaching Tigers Laidler team and I’m grateful for the opportunity. Telford has a fantastic structure and systems and under the club Head Coach and General Manager, Tom Watkins, we have great support and mentoring. We have started to assemble another competitive team and we will be looking to try and achieve the great successes we had last season again this year. The league is taking shape with some very strong teams entering. Similarly to last season, we will look to play with the same passion and pride the team showed and striving to achieve a high position in the league will again be our target. I am looking forward to getting the season going and seeing the supporters back in the rink.”

“It’s great to hear that Scotty will be returning as Tigers 2 Head Coach, while Dougie returns as the game day bench coach. I have spent a lot of time with Scotty over recent years in both his capacity as a player and a coach, a force to be reckoned with and Telford through and through. There isn’t anyone better in Laidler NIHL for this job.

I’m also getting to know Dougie a lot better, having spent a couple of seasons on the bench together we continue to go from strength to strength. Last season was a superb journey for the Tigers 2 side, and I have no doubt that we will be picking up the baton and going again, right from the get-go. Dougie is keen and eager to learn, and he will soak up all the coaching knowledge and guidance that comes his way from both Scotty and Tom, then deploy it come game day.

Also the news of Kieran Nickless returning as Tigers 2 Team Manager is great. Kieran is an integral part of the Tigers 2 team. First and foremost, as Team Manager, Kieran makes the coaches’ lives much easier. Relieving the coaches’ of planning, logistic, and communication duties, he allows Scott and Dougie to focus on developing the skills of their players. The coaches can then focus on building the team and players in the most effective way possible, coming up with drills, and providing the players with a structured approach to training and games.

No mistake, we all still have plenty to learn and develop but I’m looking forward to the season start, and I’m really chuffed that we are welcoming back our winning combination.”