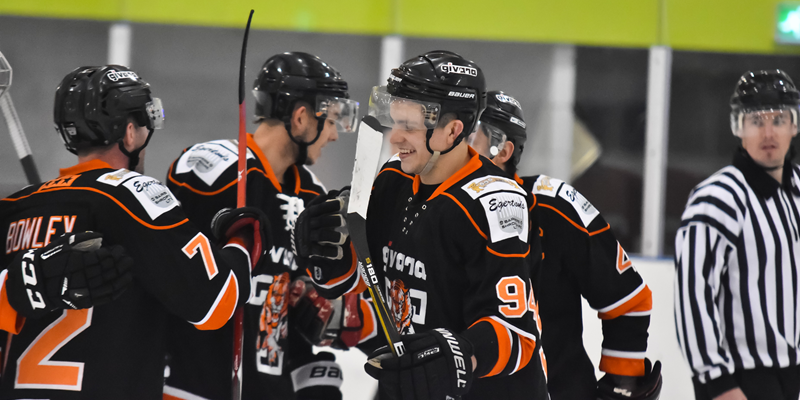 Telford Tigers 2 entertained Blackburn Hawks 2 on Sunday after their 8-5 win on the road to Deeside on Saturday.

Tigers2 started very strong with 4 even handed goals in under 7 minutes.  James Smith securing his hat trick and Karol Jets getting on the score board. Blackburn did reply with a goal from #50 assisted by #98 and #27 at 8.43 but Tigers continued dominate, to push forward and looked strong and Jets got his second goal of the night on 10.43.

Tigers number #49 Daniel Thomason revived a 2 minute penalty for hooking at 13.18, which allowed The Hawks number #96 to score a power play goal from #94

A couple of crucial saves from Tigers netminder Ted Thompson kept The Hawks from scoring their 3rd. Another 2 goals from the Tigers Charlie Hammerton and James Smith and the period ended 7-2 in Tigers favour.

The 2nd period started with a fast pace from the Tigers again and a quick goal at 20.17 from Karol Jets. Five minutes later Josh Hustwick scored off a pass from Charlie Hammerton and Matt Price to make it 9 -2. The pace slowed slightly but the majority of the play was from still coming from the Tigers.

Tigers Branden Anderton got a 2minute penalty for boarding at 27.09 to give the Hawks the power play. This was short lived as Blackburn were called for tripping 20 seconds later to make it 4 on 4 hockey.

The rest of the period was pretty much one way traffic with Tigers2 player coach Callum bowley scoring another 3 goals before the end of the period to make it 12-2 at the break.

The 3rd period was a goal frenzy.  Tigers were dominate across the whole ice pad, Callum Bowley scored another 2, and James smith grabbing another 1. Charlie Hammerton got 4 and Daniel Thomason and Will Reed both got their first ever goals for Tigers.  With everyone getting on the score sheet in one way or another it was a fantastic final period of hockey for a rampant Tigers 2.

The Hawks added a consolation goal at 51.31 before Tigers Lewis Smith rounded off the scoring for tigers with the last goal of the game on 58.29.