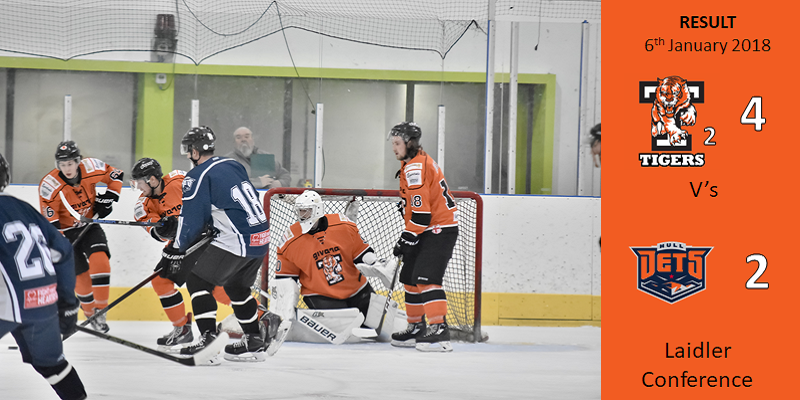 On Saturday 6th January Tigers 2 hosted top of the league Hull Jets and they were looking to continue their winning ways after winning 8 out of their last 9 games.

Both teams started well and had fairly equal shots on goal early on keeping both goalies busy between the pipes.

It’s didn’t take long for the Jets to warm the penalty box up with captain Jamie Lewis receiving a 2min minor penalty for interference at 1.18, but Tigers were unable utilise the extra man and the Jets defence kept them out of the net.

Tigers were next to warm the penalty box with #91 Charlie Hammerton being given a 2min minor penalty for holding at 7.10, but Tigers did well to stop the Jets from scoring with netminder Zack Brown making some great saves.

Tigers fought consistently for the period and were rewarded at 18.19 with an even handed goal from #4 Karol Jets assisted by #94 James Smith and #18 Joshua Hustwick.

The second period saw the Jets come out fighting for a goal and keeping Telford on the their toes.

With shots from both sides again keeping the netminders busy, it was the Jets that found the back of the net after tigers #72 Callum Bowley received a 2min penalty for boarding at 28.02. Jets scored at 29.05 from #90 Jay Robinson assisted by #19 Richard Haggar and #18 Gowan Beddoes.

The period continued and both teams played physically and received minor penalties.

The third period saw the Jets equalise at 44.25 with a power play goal for #91 Andrew Ward after Tigers #91 Charlie Hammerton received a penalty for delaying the game.

Tigers called a time out with 10mins remaining in the game and they continued to push forward and looked dangerous on the goal.

Jets #90 Jay Robinson was given a 2+10 for a check from behind and tigers used the extra man advantage well with #91 Charlie Hammerton scoring at 52.58.

This gave Tigers another boost of confidence and they quickly found the back of the net again at 56.10 from #94 James Smith.

The game ended 4-2 to Tigers and although Tigers remained in 5th place in the league it meant there was now only 2 points between the top 5 teams.

Tigers will look to continue their winning streak next Saturday 13th January when they host Sutton Sting at Telford ice rink.