Tigers 2 fight back to overcome Senators 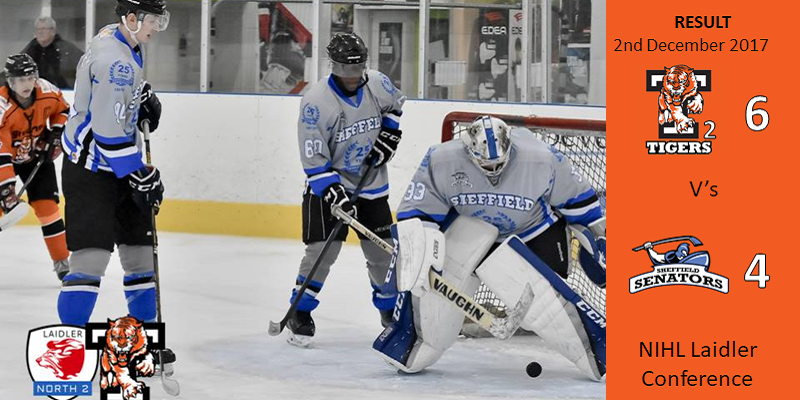 Telford Tigers 2 hosted Sheffield Senators on Saturday 2nd December in the hope of rectifying the score from their earlier encounter this season.

The game started with a quick even handed goal from senators, scored after just 43 seconds by #8 George Crawshaw.

After another senators goal at 6.42, scored by #14 Thomas Proctor, Tigers seemed to come to life and push forward to threaten the Senators goal. Unfortunately it was Senators who managed to find the back of the net again at 11.48 with an even handed goal from #8 George Crawshaw.

Tigers continued to battle and were rewarded with a power play goal after senators were given a penalty for hooking at 12.24. Tigers goal was scored by #72 Callum Bowley at 13.15.

2nd period was uneventful and fairly even from both teams. Tigers had 2 shots which hit the post and they pushed forward to no avail.

Again it was Senators that managed to score another even handed goal at 25.45 thanks to #21 Thomas Humphries, but tigers did not let this get them down.

They continued to battle hard to gain control of the puck and at 30.21 a goal from #27 Callum Griffin made it 2-4 and gave the tigers some hope.

3rd period saw the tigers come out fighting, looking to reduce the lead the Senators held, and at 40.13 an even handed goal from #94 James Smith made it 3-4.

Tigers played some good passing hockey and worked hard to then score again at 46.43 with a power play goal from #39 Charlie Hammerton to make it all level with both teams having everything to play for.

After tigers #13 Connor Keyes received a penalty at 48.31 for slashing, senators tried to find the back of the net again to gain the lead, but tigers held their ground and kept the score line equal.

At 54.35 an even handed goal from #8 Simon Harrison gave tigers the lead going into the last 5 minutes of the game.

Tigers defended well to keep the advantage but at 58.31 tigers #4 Karol Jets received a 2min penalty for cross checking. This gave the Senators a 2 man advantage as they pulled their net minder in favour of the extra player. Tigers worked hard to gain control of the puck and at 59.22 #94 James Smith scored an empty net goal to make the score 6-4.

Man of the match