Tigers 2 flew to victory in penalty shoot out… 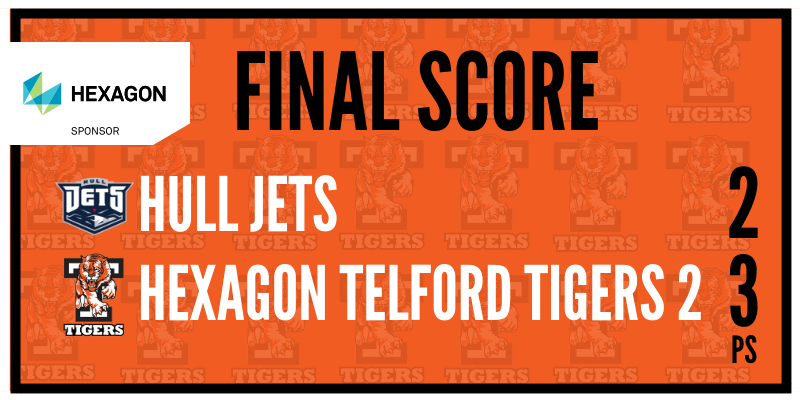 On Sunday 10th February Tigers 2 took a trip up North for their second game of the weekend, this time against Hull Jets who currently sit fourth in the league table. A win for Tigers would maintain a second place position however, a win for the Jets would see them creep up to third place, leaving only two points separating second and third place.

Hull Jets have given Tigers 2 challenging games in previous encounters with the stats being fairly even matched, so both teams knew what was install for this game. Absent players for the Tigers left them with a short bench but that wasn’t going to stop their efforts…

The puck dropped for the first period and the tempo was set high right from the start with plenty of end to end hockey within the first few minutes. Into the fourth minute of play, and the Tigers managed to get through on a breakaway with clinical passes between Washburn and Bowley, the visiting team found their first goal at 3:25. The game started to get heated when Jets’ Beach found himself sitting in the penalty box with a 2+10 minute boarding penalty; a perfect power play opportunity for Tigers. Despite the advantage, the Jets managed to pull off a strong penalty kill and deny the Tigers with another goal. Tigers managed to maintain their one goal lead to the end of the first period.

Both teams returned to the ice for the second period at once again, a rapid pace. Hull Jets were applying the pressure which paid off when they scored their equalising goal at 21:40. The period pressed on and both teams were hungry for another goal however, the Jets had a bigger appetite than the Tigers when the puck managed to trickle past Brown, giving the hosts their second goal of the game. The period ended 2-1 in Jets’ favour.

The third and final period started and Telford Tigers 2 only had 20 minutes to find their lifeline goal. Once again, the pace from both teams was immensely quick with all of the players performing to the max on each shift. As time ticked on, Tigers 2 were starting to run out of options until Tigers junior #36 Henry Adams found the back of the net with a perfect wrist shot fed from #11 Anderton at 47:29. It was neck and neck for the final 10 minutes of the game.

After pulling out all of the stops, the end of regulation time ended in a 2 goal draw, meaning both teams were going to a 5 minute overtime period. The puck dropped for the over-time and it wasn’t long before the Jets landed themselves with a 2 minute minor penalty for hooking at 60:50… Another perfect opportunity for Tigers 2 to dominate the ice however, they couldn’t capitalise on it. The overtime period was complete in a blink of an eye, and with no more goals to take the win for either team, penalty shots would be the decider.

With the first saves under their belt for both teams, Henry Adams was next for the Tigers who found the back of the Jets’ net… The bench and the Tigers fans in the stands went wild! Brown went in with another save and so did the Jets and the next shot for the Jets was the decider… Brown pulled it out of the bag with another save and sealed the win on a 4-point weekend for Telford Tigers 2!

Tigers 2 player-coach Callum Bowley was ecstatic with the result and the performance of the team commenting:

“It was a big win for us on the road. I thought we came out very strong in the first period and dictated the tempo of the game, we got pucks deep, we made it really difficult for Hull and we won the period 1-0 which was the start we needed. As for the second period, we got away from our game and started to make simple mistakes.

Hull put us under a lot of pressure and we struggled to deal with it at times because we didn’t do a good enough job in supporting the puck and breaking out of our own end, which resulted in us losing the period. In the third we managed to get going again and be more direct in our play. Henry popped up with a big goal in the third to take us to overtime and then Zack kicked big when we needed him to in the shout-out. Four points was our target and I’m pleased we were able to get them the way we did!”

Tigers 2 will next be at home on Sunday 24th February where they will welcome Blackburn Hawks 2 to Telford Ice Rink. Before then, they will travel to Widnes to face the league leaders in another exciting encounter!