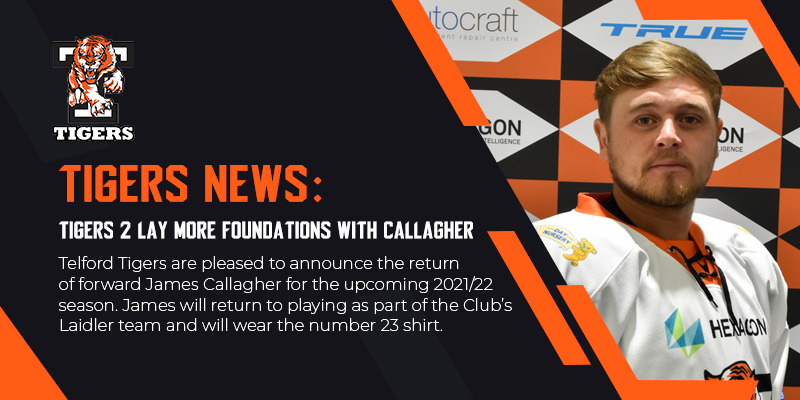 Telford Tigers are pleased to announce the return of forward James Callagher for the upcoming 2021/22 season. James will return to playing as part of the Club’s Laidler team and will wear the number 23 shirt.

The 27-year-old has played competitive hockey in Shropshire since 2007 and made his Telford debut with the Telford Rockets, competing in the England U16s squad. Following his debut season, Callagher took a year out before returning to the ice where he joined the Telford Trojans U18 squad. He iced with the Trojans until the 2014/15 where he then made his first senior appearance in the Tigers NIHL 2 roster.

Callagher has continued to play with the NIHL Tigers side since then and will be returning this year for his sixth season with Tigers.

Telford Tigers 2 coaching team Scott McKenzie and Doug Wildman are pleased to have signed Callagher for the upcoming season commenting:

“It’s great to see Bricks [James] back in a Tigers jersey. He’s a player who grinds opponents down with his bump and bash style play creating turnovers. He gives 100% every shift and puts his body in the way and we expect no less from him again this year.”

“It’s great to be back for another season. It’ll be great to get back on the ice with the lads again after not being able to play the past year so looking forward to icing with them again this year.”

James’ own and loan shirts are available to order now for £75 each (Home and Away). Please see the Tigers’ Online Shop for details.