Tigers 2 make it a 4-point Weekend! 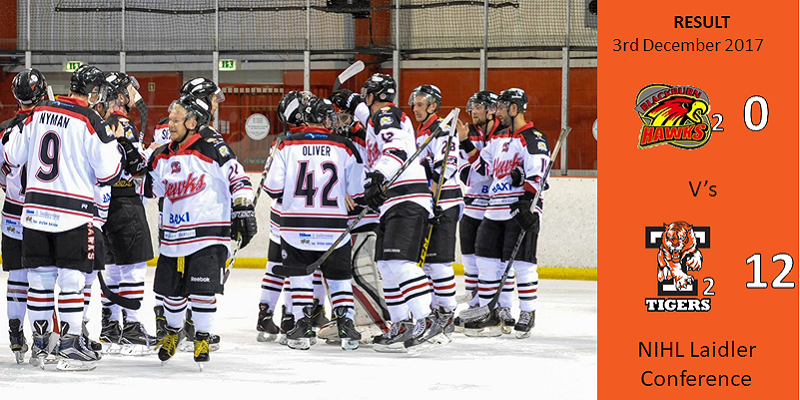 After a complete turnaround game on Saturday against Sheffield Senators, the following day saw the Tigers 2 boys take a trip North to face Blackburn Hawks 2. Player coach Callum Bowley was determined for the team to bring home another 2 points to make it a 4-point weekend.

Once the puck dropped it didn’t take long for Tigers 2 to pounce and an even-handed goal from #94 James Smith at 0:44 put the Tigers in the lead. The first period saw the puck mostly in Tigers possession, but that didn’t stop the Hawks digging for the puck! 4 minutes and 56 seconds in and Tigers 2 struck again, another even-handed goal from #94 James Smith assisted by #66 Matt Price and #40 Ben Washburn put the Tigers into a 2-goal lead.

Tigers 3rd goal came only 4 minutes later, player coach Callum Bowley scored at 8:22 and later again at 15:31 for the 4th goal. Bowley made the decision to then swap the net-minders from newly signed Zack Brown to youngster Ted Thompson in the Tigers net immediately after the Tigers’ 4th Goal. The first period ended with Tigers leading 4 goals to nil.

The start of the second period was yet again another great start for the Tigers and an even-handed goal from #75 Liam Preece at 22:42 assisted by #11 Brandon Anderton and #23 James Callagher pushed the Tigers further into the lead!

With still no penalties on either side, Tigers pushed on to get more goals and the 6th Tigers goal at 27:50 from #39 Charlie Hammerton lead the Blackburn Hawks to take their time out. The Tigers took advantage of it and their tactics paid off, with #8 Simon Harrison scoring at 32:51 assisted by #13 Conor Keyes.

It didn’t take long for the Tigers to bite the Hawks again with another goal, and the 8th goal was scored at 34:14 by #39 Hammerton. A couple of minutes later and things started to spice up with Hawks’ Joe Charlton receiving a 2+10 check from behind penalty at 36:42. The period ended 8 goals to Tigers.

Things started to become heated between the Hawks and Tigers in the third period and a scuffle between Jack Murray and Karol Jets saw the Tigers receive their first penalty minutes in the game! Murray came out with a 2+2 for roughing and high sticks whilst Tigers’ Jets received only 2 minutes for roughing, both timed at 41:17.

Another penalty for the Hawks at 45:13 saw Evan Corner receive 2 minutes for kneeing. Tigers capitalised on the power-play and Captain Karol Jets fired the puck into the Hawks net at 45:29 making the score 9 nil in the Tigers favour.

Less than a minute later, #94 James Smith picked up his hat trick goal of the evening, assisted by Jets and Price at 48:13, making the score 10-0 to Tigers.

With only 11 seconds of play since the last goal and another incident saw punches being thrown from Tigers’ own Hammerton and Hawks’ Ainsworth. Hammerton received 2+2 for fighting whilst Ainsworth was given 2+2 for fighting in addition to a 2+10 check to the head penalty, all timed at 48:24. #94 Smith joined Hammerton in the penalty box shortly after for a 2-minute charging penalty timed at 51:01.

Despite the disruption with penalties, there was no stopping the Tigers! Quick touch passes from Griffin and Price created the perfect set up for #40 Ben Washburn to fire the puck straight into the back of the Hawks net! The 11th Tigers goal from Washburn was timed at 51:53.

Another penalty at 52:53 from Hawks’ Captain Thomas Helm saw Tigers’ Hammerton score a powerplay and his hat trick goal at 54:24. With less than 5 minutes left in the game there was still plenty more action! Tigers’ #8 Simon Harrison was given a 2+10 penalty for a check to the head, timed at 56:17.

After an entertaining and action packed third period the final buzzer sounded, a disheartening defeat for the Hawks. The game ended with a staggering 66 shots on the Hawks and only 11 shots on the Tigers.

The game ended in a 0-12 victory for Tigers.

Man of the Match: #30 Ted Thompson