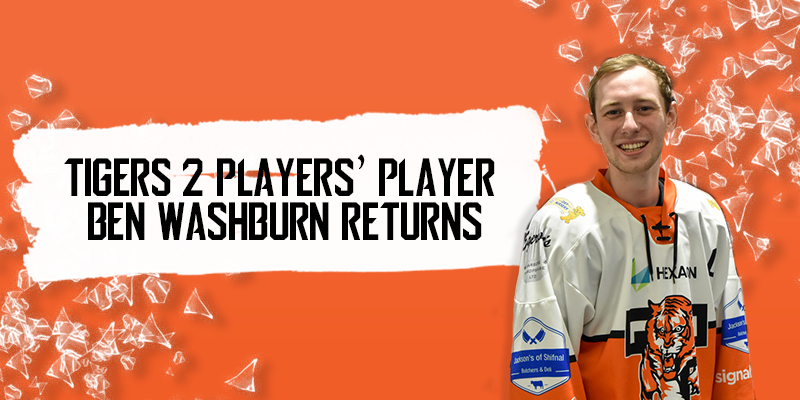 As ice rinks begin to open across the Country, the Club are pleased to share more signing news for the upcoming season; we welcome back Ben Washburn.

Washburn began his hockey career in Telford 2005 where he developed through the junior hockey system. Starting with Telford Venom, Ben progressed his way through Telford Trojans, Titans to then finally making his senior Tigers debut in 2014. The 23-year old forward has played for the NIHL side in Telford for the past six seasons and has made his mark every season.

Even though the 2019/20 season was cut short due to Coronavirus, Washburn still managed to sweep up on both the ice and in the dressing room. Whilst taking on the Captaincy role Ben took the top spot for assists within the team as well as being presented with the players’ player award at the Club’s virtual end of season awards.

Telford Tigers 2 coach Scott McKenzie is thrilled to have secured Ben for the upcoming season commenting:

“It’s great to have Ben back in a Tigers jersey. He is a glue player, which means that he is consistent, hard-working, creative and committed.

He is someone that can play up and down the line-up and extremely important to the Tigers. As a coaching staff, we are looking for a big season from Ben as we all know his capabilities.”

Ben is also pleased to be returning to Tigers for another season commenting;

“I’m incredibly excited to be back wearing the Tigers badge for another year. I played for Scotty many years ago, so when we got the news he would be taking over I was excited to say the least. I believe him and Dougie combined will be a formidable coaching team.

With the premature end to last season, I cannot wait to get back on the ice with the boys, it feels like a long time coming and I know we have a point to prove to get back where we belong in the league table.

I hope everyone is staying safe and I can’t wait to see everyone when the season finally starts.”

We would also like to thank Acute Pest Control Telford who have agreed to be Ben’s individual sponsor for a further season. Ben’s own and loan shirts are available to order now for £75 each (Home and Away). Please see the Tigers’ Online Shop for details.