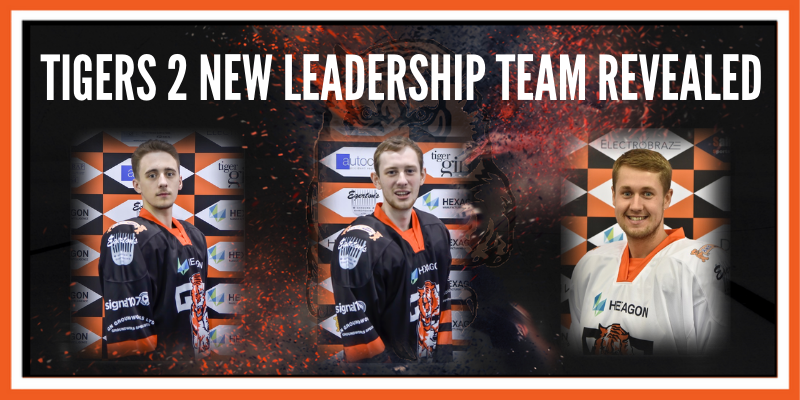 With the upcoming season, only a matter of weeks away and plenty of players announced with still more to come, it’s time to announce the new Telford Tigers 2 leadership team.

Tigers 2 coach Fielder is delighted to have appointed three new players to assist him in leading the senior team in what is hoped to be a successful season.

“Captains and assistants are very important to my team” says Fielder. “From the day I was appointed as Tigers 2 coach, I’ve been thinking who they should be; it’s been a very tough decision to make because we have a lot of players who could do the job!”

Telford Tigers are pleased to announce Ben Washburn as the new Tigers 2 Captain.

“I’ve have chosen Ben as my Captain because I know that the players respect him. I’ve known Ben since he started playing U10s and he’s always led with his hard work through all the junior age groups. Ben is someone who I’ve spoken to a lot since becoming coach and I respect him; he’s open and honest and with his leadership skills there’s a good chance he’ll be holding up some silverware this season.”

When asked about his Captaincy role, Ben was delighted to have been asked to take on the role by Fielder commenting;

“I feel extremely honoured by the opportunity to captain a senior team of a club I have played for my entire junior and senior career. It was extremely humbling to be asked by Dave and listen to the faith he had in me about taking on the role. Matt Price, who unfortunately has had to step down as captain due to work commitments, led by example and was a fantastic captain last season. He has made it a lot easier for me by being so supportive during this process.”

“Callum is my first ‘A’ I remember, first developing him up to play Titans at 16 years old” comments Fielder.

I think over Callum’s young career he has been over looked, but has not stopped working hard; and because of his not stop work ethic both in games and training he has earned his ‘A’ role.

Callum Griffin was thrilled to have been asked to take on his role commenting;

“I’m very honoured to be assistant captain of this great team. I appreciate the opportunity Ces has given me; it’s a massive boost to my pre-season preparations and I can’t wait to get the season going!”

Jordan Jolly is the final piece to the Tigers 2 leadership puzzle, despite his age he’s a great addition to the line-up.

“JJ is my second ‘A’, he’s only 20 but over the last couple of seasons he’s come out his shell and is now a very confident player. He’s been my captain and assist in his junior years so I know he will do a great job and help lead his team” comments Fielder.

Tigers 2 Captain, Ben Washburn is pleased to have Griffin and Jolly on board saying;

“I’ve got two great A’s in Griff and Jolls that I know both lead by example, give 110% every time they put a Tigers shirt on and that I can trust all the way. We have a great group of lads full of natural leaders and an incredible amount of talent, so I’m looking forward to the season and seeing what we can achieve as a team.”

Telford Tigers 2 continue to work hard behind the scenes over the coming weeks to firm up a final solid roster and prepare for the fast-approaching new season.