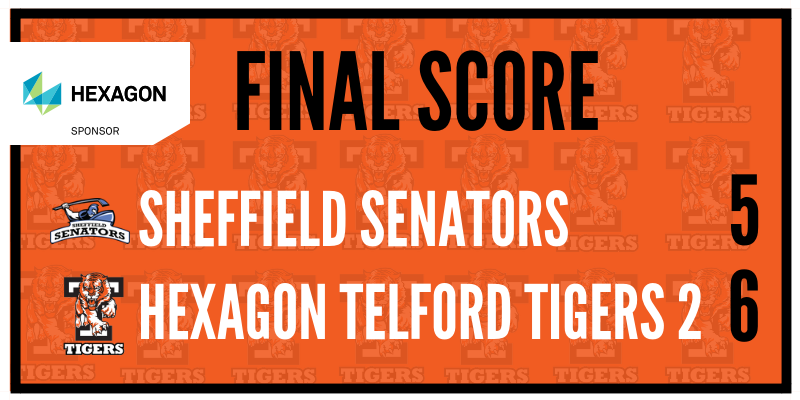 Hexagon Telford Tigers 2 had a tough weekend this week with two back to back fixtures with only one focus in common across all the teams; bring home the points! Tigers 2 managed to hit the ground running on Saturday with a home win against Bradford Bulldogs, but the following day saw the Shropshire side travel to Sheffield to fight for a top third spot in the league table against Sheffield Senators.

The puck dropped for the first period and once again, it was Tigers 2 who dominated the ice with an early opening goal at 4 minutes 41 seconds scored by player-coach Callum Bowley. This was shortly followed by a second Tigers goal from #27 Callum Griffin who capitalised on the powerplay after Senators’ Humphries was given a minor penalty for interference. It didn’t take long for the up their goal lead, with a third goal at 13:59, again scored by Bowley; assisted by Smith and Washburn. However, it didn’t take long for the host team to respond with an even-handed goal at 14:47. The first period ended in the Tigers favour 3 goals to 1.

The second period began and Tigers 2 made their mark once again when #59 found the back of the Senator’s net during a delayed penalty at 26:05. Again, Senators were quick to act on the fourth Tigers goal when their scored their second goal of the game only 40 seconds later. The half way point of the game passed, and the host team started to gather some momentum with a third goal at 30:31… Tigers 2 needed to pick up the pace to stay in the game but a backhand pass from Smith found Washburn on a breakaway who managed to tuck away the puck in the bottom left of the Senators net for the fifth Tigers goal at 31:03. Once again though, Senators didn’t back down and another even-handed goal found the hosts only one goal behind the Tigers at 33:32… The second period ended Senators 4, Tigers 5.

The game was still all to play for in the third and final period and both teams pressed on to find some more goals. A reoccurring theme started to emerge when Tigers 2 found the first goal of the period once again; this time from Telford youngster #46 Finley Howells, assisted by Smith and Supa. With a comfortable two goal lead, Tigers 2 continued to apply the pressure for the remainder of the game and coach Callum Bowley decided to take a team time out at 57:08 to regroup and discuss tactics for the final few minutes of the game. Less than 30 seconds later, Senators managed to close the goal gap once again after a high-stick penalty for Tigers’ Howells provided the hosts with another powerplay opportunity which they capitalised on at 57:33.

With less than 3 minutes remaining in the game, and a track record of the two teams exceeding regulation time on a tie; both teams were looking for a game decider goal. With less than 40 seconds remaining on the clock; Senators decide to take their time out which resulted in them gaining another outfield player for an empty net… The pressure really was on! Finally… much to the visiting team’s delight, the final buzzer went meaning Tigers 2 had a 4 point weekend in the bag!

Player-coach Callum Bowley was delighted with the team’s performance commenting:

“We started very strong against Sheffield and controlled the first period very well. We did a really good job in not forcing plays and being more patient on the puck which meant we had more time in possession and it helped in wearing them down. Going into the second I thought we got complacent and got away from good habits, which has to stop.

But after speaking about it after the second period, the team responded and shown great character to come back out strong and see out the game to earn a massive four points. Everyone really stepped up this weekend.”

Hexagon Telford Tigers 2 now sit third in the league table on the same points as Hull Jets and will next be playing at home on Saturday 26th January where they welcome league leaders, Widnes Wild to Telford Ice Rink for a 19:00 face off. This is a game you won’t want to miss for sure, match night tickets are available to purchase online now by clicking here.