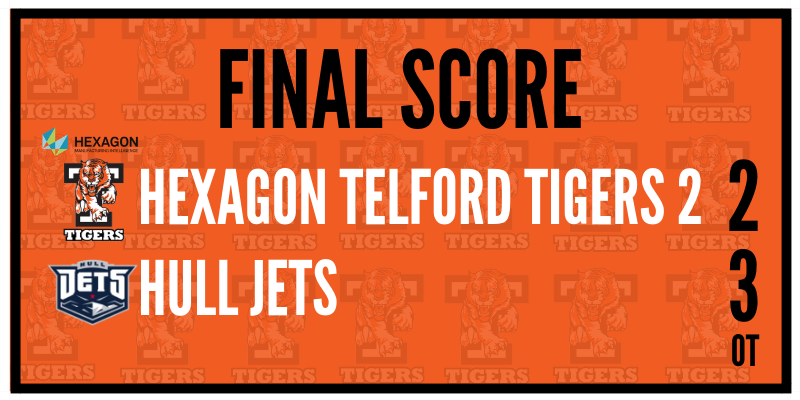 Sunday 14th October saw Telford Tigers 2 take on The Hull Jets at Telford in a hard-fought game of hockey.

Tigers kept their discipline in the first period, resulting in a power play goal for #96 Charlie Hammerton.  The period saw end to end hockey with some great saves by #41 Zac Brown, the first period ended with the Tigers 1 goal up but the jets outshooting them 16 shots to 9.

The second period saw the Tigers kept mostly in their own zone, there were penalties on both sides but neither side could find the back of the net.  5 minutes into the period saw the Jets level the score.  There were a few scuffles on the red line half way through the second period, but no calls were made. The period finished one all but again the Jets out shooting the tigers 13 shots to 9.

The Third period started 4 on 4, with the Tigers gaining the advantage when they returned to full strength first with a goal from #89 Lubomir Plandor. Much to the fans delight as the rink erupted as the Tigers took the lead once again.  This was short lived when the Jets levelled the score to 2 all half way through the third.  The final buzzer sounded, and the Tigers went into the first overtime of the season.

The Jets scored 15 seconds into overtime in a disappointing end to the game.

“We struggled to get going and make things difficult for Hull. We made too many mistakes and were very sloppy in possession of the puck, it’s a good job Zack came up big for us. We picked up a point, but it feels like a huge point lost as we should have come away with two points and that’s no disrespect to Hull as I thought they played really well.

The most important thing right now is how we respond against Widnes on Sunday. We have to go there prepared.”