Tigers 2 suffer their first loss of the season… 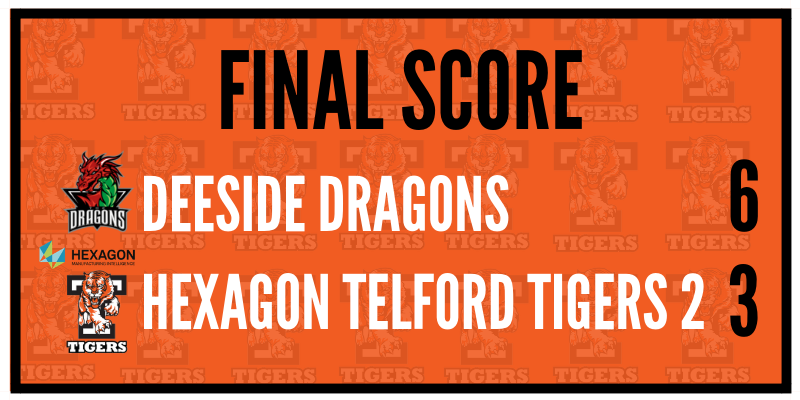 On Sunday 30th September the Tigers travelled to Deeside for the second game against the Welsh side this season. With the Welsh anthem over, the game started well. Even with a few team members missing, the first goal was scored by Tigers’ Captain #4 Karol Jets 37 seconds into the game. Directly following the goal Jets was on the receiving end of a penalty leaving him needing medical attention whilst fighting broke out around him.

Jets was taken from the ice after the incident. Penalties were given and Tigers Forward #96 Charlie Hammerton scored a power play goal.

Deeside pulled a goal back ending the period with the Tigers taking a 2-1 lead. The second period saw both teams score again, and more penalties for fighting on both sides. Deeside’s off ice officials struggled to keep control as a fan entered the penalty box to express his displeasure at one of the young Tigers.

The Period ended on a three all draw.

The third Period saw the Tigers heavy legged from playing good hockey against Widnes 18 hours before and losing players to injuries following hits resulting in penalties for the Deeside team, concede three more goals. A late hit from Deeside in the last four minutes of the game resulted in more roughing.

After what felt like a long three hours the game finally ended with the Tigers losing 6-3. Coach Bowley had this to say about the game:

“I was disappointed with the performance from my team tonight especially after picking up a big win
on Saturday against Widnes, I thought we were second best in every department and lacked energy.
That being said, there was no rhythm to the game because of the amount of penalties and given we
were short benched due to a few players picking up injuries and a few players picking up penalties, it
made it tough. We have to be better and can’t take games for granted, I know we’ll look forward to
playing them again, I’m pretty certain it’ll be a totally different game.”

Telford Tigers 2 will be back in action on Sunday 14th October where they will welcome Hull Jets to Telford Ice Rink for a 18:00 face-off.