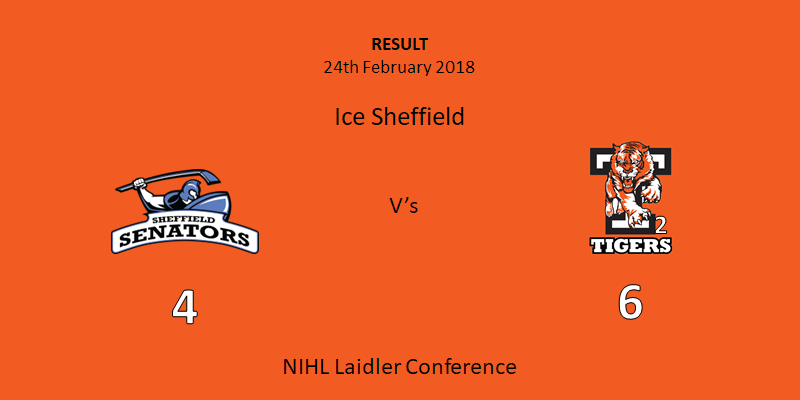 Telford Tigers 2 took a massive step to securing a spot in the end of season play-offs with a win against Sheffield Senators in Sheffield.

After a rare weekend, free of hockey; Tigers 2 were ready to pounce with an away game at Ice Sheffield on Saturday 24th February where they were guests to Sheffield Senators. With only a handful of games left in the 2017/18 Laidler Campaign, Tigers 2 are looking to bring home all the points they can to be in for a play-off spot!

The puck dropped for the first period and Tigers 2 quickly had control of the game. It was #91 Charlie Hammerton who grabbed the first goal of the game at 2:21, assisted by #94 James Smith. Tigers 2 really got the game going and Captain Karol Jets managed to find the back of the Sens net less than a minute later with an unassisted goal at 3:03. Several penalties for Senators left them short on the ice, allowing Tigers 2 to dominate the game. Player coach Callum Bowley scored Tigers’ third goal of the game at 10:31, assisted by #11 Anderton and #75 Preece.

There was still more to come in the first period from the Tigers! A slashing penalty give to Senators’ Martin resulted in a powerplay goal for Tigers, scored by defenceman #75 Liam Preece at 15:12; assisted by #66 Price and #11 Anderton. Sens were determined to get a goal before the end of the period and they succeeded with less than 40 seconds to go until the end of the period. The first period ended Senators 1, Tigers 4.

The second period got underway and Tigers were struggling to finish any chances they created. At 25:36 Senators managed to get the puck past Tigers’ netminder Zack Brown to give them their second goal of the game. Tigers 2 had a tough period and didn’t manage to add to the goals. The second period ended Senators 2, Tigers 4.

The puck dropped for the third and final period and Tigers needed to secure the win! The period started with plenty of action both ends of the ice but it was Tigers who managed to secure another goal. A crosscheck penalty for Senators’ Wain enabled Tigers to capitalise on the powerplay and score their fifth goal of the game. The goal was scored by #91 Charlie Hammerton, assisted by #72 Bowley and #4 Jets at 47:15.

Senators responded quickly to the fifth Tigers goal with yet again another powerplay goal at 51:00. This didn’t scare off the Tigers and they came back with another goal less than 2 minutes later with an even-handed goal from player coach Callum Bowley at 52:14, assisted by Smith and Jets. With less than 10 minutes remaining in the game, both teams continued to put on the pressure and create some goal chances. It was the Senators who succeeded first with a shorthand goal from Parkes-Britton at 58:38. The buzzer sounded for the final time and it was Tigers 2 who took the win!

A great result for the boys in orange as they celebrated the win as well as celebrating Tigers’ forward #40 Ben Washburn’s 21st Birthday. As Tigers 2 continue to retain their spot in the tables as they work towards earning themselves a spot in the play-offs.