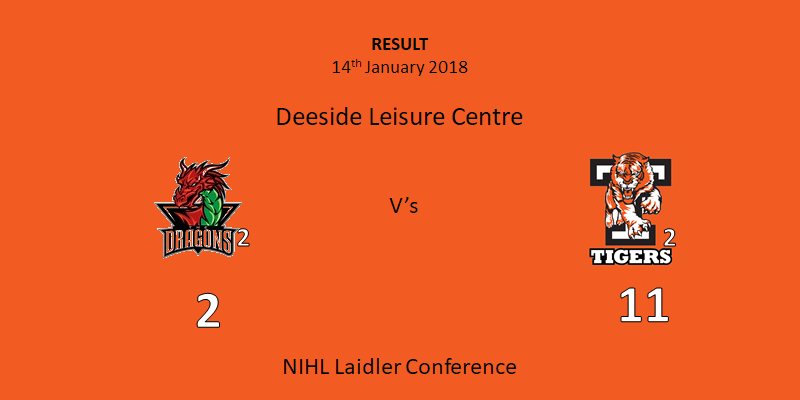 Telford Tigers 2 travelled away this Sunday to face Deeside Dragons 2, in hope that they would bring home another 2 points to make it another 4-point weekend.

The first period saw Tigers 2 with a sharp and snappy goal with only 1 minute 33 seconds on the clock from player coach Callum Bowley. This set up the team nicely, and they continued to dominate the ice with a second goal only 3 minutes later at 4:36 from #91 Charlie Hammerton.

The Dragons could feel the pressure and saw themselves chasing the Tigers just for a touch on the puck. It was #94 James Smith who secured the Tigers’ third goal at 8:33, assisted by #4 Jets and #39 Aston; this was then followed by a decision to swap the Tigers netminder from #90 Zack Brown to Telford youngster, #30 Ted Thompson.

Tigers 2 continued to push the Dragons and found themselves another goal up at 14:52 with their forth goal coming from yet again #94 James Smith. The period continued with good play from both sides and plenty of shots on the Dragons netminder. A scuffle behind the Deeside net saw Dragons’ Karl Bacon and Tigers’ Brandon Anderton both receive penalties for roughing. The first period ended in Dragons 0, Tigers 4.

The puck dropped for the second period and the Tigers were looking fatigued. They battled hard to break through with the puck but just couldn’t get it in the Dragons’ net. At around the halfway point of the game, the Dragons manage to slide the puck past Ted Thompson and score their first goal at 30:36. Of course the Tigers weren’t going to settle for this and responded with their fifth goal of the game at 31:56 from #72 Bowley. Tigers were able to pick up the pace again and a hat trick goal from #94 Smith at 34:29 put the score line at Dragons 1, Tigers 6.

The Dragons quickly responded to the Tigers power play Goal and an even-handed goal at 34:54 from #16 Davies put a second goal on the board for the Dragons. Both teams were showing some gritty performances but it was the Tigers which came out on top for the second period, with another power play goal at 37:20 from #72 Bowley, his hat trick goal and Tigers’ seventh goal of the game. The period ended Dragons 2, Tigers 7.

The puck dropped for the third and final period and Deeside Dragons could feel the strain. A strong performance early on in the period gave the Tigers their eighth goal of the game scored by #94 Smith at 43:52. This wasn’t the last of the Tigers goals… a power play Goal only 2 minutes later from #11 Brandon Anderton, assisted by #66 Price and #27 Griffin put the Tigers in a very comfortable position.

The period continued with hard work and determination shown by Tigers junior Rhys Howells and some fantastic saves from the Dragons’ netminder. After a handful of attempts of scoring and frustratingly not succeeding… Tigers’ Captain #4 Karol Jets secured the tenth Tigers goal at 54:25. That wasn’t the last of it for the boys in orange and black with James Smith striking once again and scoring the final goal at 58:16.

The sound of the buzzer went, a disappointing game for hardworking Deeside Dragons but a 9th consecutive win for Telford Tigers 2. Telford Tigers 2 now sit in a play-off spot in the Laidler Conference League table and only two points behind top of the league leaders, Widnes Wild.