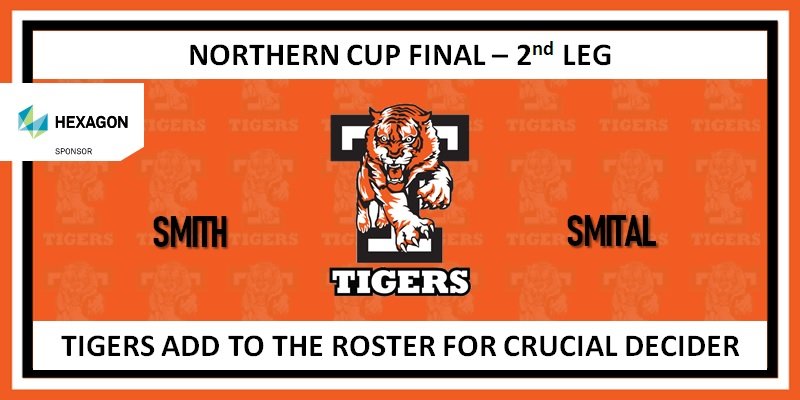 Tigers add to the North Cup 2nd Leg Roster. The Hexagon sponsored Telford Tigers have quickly taken steps to add to the roster for the crucial 2nd leg decider in the NIHL North Cup this evening.

Tigers have called up #94 James Smith from the Tigers 2 roster to bolster the forward line due to the absence of Andy McKinney and following talks with the league over the last couple of weeks, they have been granted goalie dispensation to ice Matt Smital from Slough Jets.

James Smith will be no stranger to Tigers fans having iced between the two teams regularly over the last few seasons but Matt Smital may be a new name to a few.

Matt is currently playing at Slough Jets and has played previously with Bracknell Bees and Swindon Wildcats between 2016 and 2018.

We hope you give both players a huge Tigers ROAR and welcome them to a massive game.

Tom Watkins, Head Coach and General Manager, said “I’ve called James Smith into the line up for tonight’s second leg of the final with McKinney suspended and we have a goalie dispensation approved for Matt Smital to play between the pipes tonight. I’d like to thank the Slough Jets for making Matt available to us.   I think the guys are very keen to get going this evening. The team showed a great desire in the third period last night. It’s in our barn tonight and as I said last night this tie is far from over.”

Don’t miss out on what is likely to be one of the biggest games of the season so far.

Get your tickets booked, either online or the last few will be available on the door this evening.  Face off at 19:00, doors open at Telford Ice Rink from 18:15.