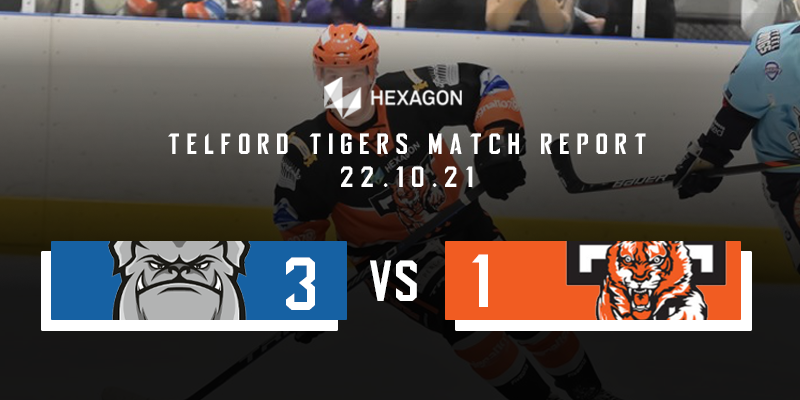 Tigers Away Day Blues. Hexagon Telford Tigers travelled to Ice Sheffield on Friday evening for a National League game against Sheffield Steeldogs. Tigers had lost their only previous league game to Swindon on penalty shots and were looking to get their first win of the season. Prior to face-off, Tigers suffered from several injury and unavailability issues meaning key players Jonathan Weaver, Andy McKinney and Scott McKenzie were all unable to play, leaving the lineup short of experience against a strong Sheffield team.

A scrappy first period saw Tigers under the cosh early on and facing an extended penalty kill after a very questionable call against Sam Watkins for high sticking. Watkins was checked by Nathan Salam on the Tigers’ blue line and fell to the ice backwards. As he fell, his stick struck Salam in the face and referee Good called a four-minute penalty. Tigers battled throughout the adversity and managed to kill off both penalties without conceding but late in the period faced another penalty kill after Nick Oliver was awarded a tripping penalty. With just 11 seconds of the penalty left, Sheffield’s Jason Hewitt found the unmarked Alex Graham in the right circle, allowing Graham to shoot low past Brad Day in the Tigers’ goal to give the home side the lead.

Tigers would again be short-handed early in the second period with a further dubious call. Nick Oliver attempted to stick check a Sheffield attacker who appeared to have lost control of the puck and then lost his balance but Referee Good called a very harsh tripping penalty.  Whilst a man down, Tigers were able to make a break-in on Dimitri Zimozdra in the Sheffield goal. Jason Silverthorn was sent clear and as he drew back his stick to shoot at goal he was hooked and a penalty shot was called. Silverthorn skated purposefully towards the goal, deked to the left, sent Zimozdra sprawling forward and then took the puck to the right and shot it into the empty net to give Tigers a deserved goal and level the game. Tigers went close shortly after when a terrific passing move between Sam and Jack Watkins, left Jack Hopkins free in the slot, the young forward smashed a wrist shot off the inside of the post but the puck bounced out and was cleared to safety. The period ended with Tigers in the ascendancy but level at 1-1 heading into the third period.

Within, the first minute of the period Tigers fell behind, Ricky Plant lost the puck on the boards in the defensive zone and Sheffield cycled the puck to Graham who shot low past Day to put Sheffield ahead. Tigers pushed for an equaliser and as the clock reached the final 5 minutes, Sheffield sealed the game with a power-play goal. Dan Mitchell – guilty of a hooking penalty, was in the penalty box and Hewitt finished off a slick Sheffield passing play that left Day with no chance. Tigers battled to the end but had no reward for the efforts and sank to their second defeat of the season.

After the game Head Coach Tom Watkins, commented, “I’m really disappointed for the players to lose tonight, they gave it a really solid effort, played a very strong road game against a gifted team and unfortunately came up a little short but I think we can hold our heads high this evening. With three key players out of the lineup tonight it was always going to be very difficult but the attitude, work ethic and commitment were excellent. We managed to keep a strong offensive team largely to the outside and only gave up a lot of perimeter shots and you could sense their frustration. We always felt we had a good chance to pick up the points. There are plenty of positives tonight not least the play of our young forwards Jack Hopkins and Sam Watkins, both playing well above their age and experience as part of our second line tonight and created some great opportunities.”