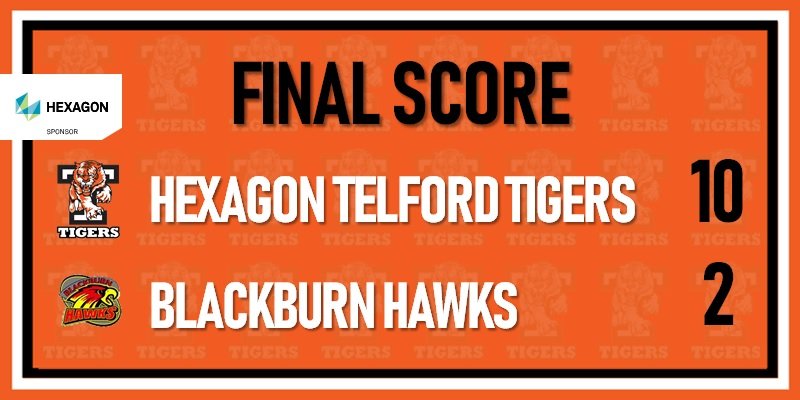 Tigers Bid Farewell to Clarkson with Ten Goal Win.  Hexagon Telford Tigers 1 faced off against Blackburn Hawks on Saturday night at Telford Ice Rink. The game was the final home game for Tigers’ Canadian import forward Doug Clarkson as he leaves the team to pursue his career as a firefighter back home.

Tom Watkins, Head Coach and General manager said, “Doug has been playing through his notice for a few weeks now after informing us he is heading home for personal reasons. It certainly came as a shock and is a blow for the team which leaves a big a hole.  But, as a team we will come together to collectively fill that gap. Doug leaves the team with our best wishes for the future and we really hope to see him back at Telford Ice Rink in the future as a fan during his travels.”

Watkins also commented on Tigers’ inability to replace Clarkson as the deadline for signing new players has passed. “I’m sure there will be people from the outside saying, that’s it, that’s the end of Tigers’ hopes. That should give us motivation. I see it as a challenge and another obstacle that we have to overcome.” But Watkins is hoping that gives the opportunity for another member of his squad to step up. “I’m going to try a few guys in a few different positions,” he added.

Tigers had been replaced at the top of the table on Thursday after Hull Pirates beat Sheffield Steeldogs 13-2, albeit having played a game more than Telford.

Tigers started the game without Jonathan Weaver but were able to add Corey Goodison, Dan Mitchell, Jed Moreland, Henry Adams, Alex Blake, Fin Howells and Ryan Lewis as back up net minder. In goal for Telford was Tom Hovell and for Blackburn Niks Trapans.

Tigers made the perfect start to the game with a goal in the second minute. Adam Taylor played the puck from behind the goal to Clarkson whose shot was saved by Trapans but the rebound landed perfectly for Andy McKinney to tap into the net. Tigers extended the lead in the fifth minute when Jason Silverthorn’s shot was blocked in front of goal and Ricky Plant deflected the puck over Trapans into the net for Tigers’ second goal. In the 10th minute, Clarkson had a glorious chance but shot over the goal.  Tigers then added a third goal when a Blackburn defender attempted a clearance that was intercepted by Jack Watkins who placed a precise wrist shot past Trapans into the top left hand corner of the goal.  In the 14th minute, Tigers were already a man down after Brodie Jesson was serving an interference penalty and also lost Danny Rose. Referee Hamilton appeared to have missed the infraction but awarded Rose a five minute game penalty for high sticks after a Blackburn player was cut. Rose was ejected from the game, giving Blackburn a five on three power play. Early in the power play, James Royds scored for Blackburn to cut the lead to 3-1. Tigers killed off the remainder of the power play to end the period 3-1 ahead.

Blackburn opened the second period by scoring their second goal just 51 seconds into the period. Luke Boothroyd hitting a slap shot from the blue line past Hovell low down.  Tigers responded two minutes later with their fourth goal. Ricky Plant beating two defenders, drawing the net minder and passing to Silverthorn to tap home. Shortly after, Tigers added a fifth goal, McKinney scoring his second of the night after terrific set up play by Taylor. Tigers took the game away from Blackburn with two further quick goals. Firstly, Silverthorn tipped Goodison’s shot past Trapans for the sixth goal then Clarkson made a magnificent back handed pass to send Taylor clear on goal. Taylor buried a wrist shot low past Trapans for Tigers’ seventh goal to end the period firmly in control of the game.

Tigers scored the eighth goal in the 50th minute whilst on the power play. The team retained possession of the puck and good set up play by Scott McKenzie gave Plant an empty net to shoot into. Five minutes later, Silverthorn completed his hat trick with a wrist shot low into the net from Joe Aston’s pass. As the game entered its final stages, Jack Watkins added his second and Tigers’ tenth of the night. Tigers changed their net minder for the last five minutes giving Lewis some time in the crease. Clarkson was looking to end the game with a goal but despite numerous shots, the goal would not come.

The win keep Tigers in second place in the league, a point behind leaders Hull with a game in hand.

After the game coach Tom Watkins said, “It was a good performance tonight from the guys. We scored some decent goals that were spread through our line up which is always good.

Our power play should have been better, we mismanaged the puck and nobody really took control and settled it down. It was good to give some of the younger players ice time, I thought Alex Blake was steady as he got his first shifts at this level and it was good to see Dan Mitchell back on the ice. He creates so much energy with his speed and his physical play.”