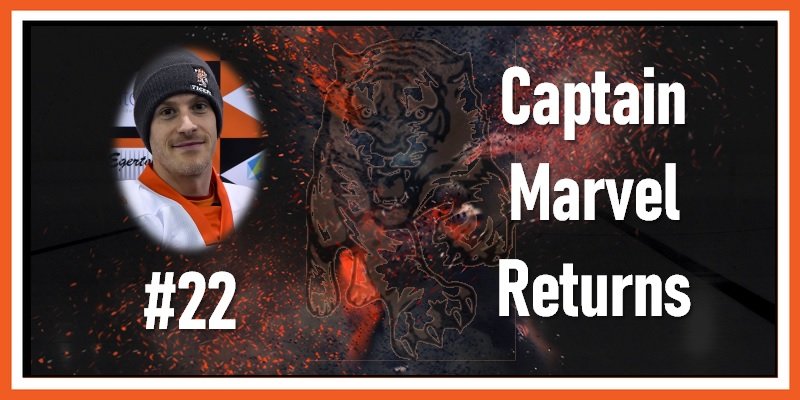 Tigers’ Captain Marvel Returns!, Telford Tigers are delighted to announce the return of Canadian import forward and club captain Jason Silverthorn for the 2019/20 season. Silverthorn will return for his sixth year with the Tigers and will wear his familiar number 22 shirt. Silverthorn was captain of the team during both Tigers’ recent EPL championship winning teams and has amassed a remarkable 454 points in his Tigers’ career so far.

Silverthorn stated, “My family and I are happy to be returning to the Tigers and to be able to stay in the area which we have called home for the last five years.  We as a family are invested in both the club & the community and could see no other option than to resign.

This season we as a club will embark on another new challenge as we join the newly formed National League and venture into the unknown much like our first season in NIHL. After speaking with Tommy (Watkins) and hearing his plans, the future promises to be an exciting one, combined with a return to a league full of competition from top to bottom and some new faces for everyone to get behind.”

Tom Watkins, Head Coach and General Manager, said, “It was an easy decision to bring back Jason. He is the epitome of what you want from a hockey player, he never gives less than 100% and is an example to the younger lads of how to train, how to prepare for and play games. He is a massive asset to the club and I’m sure the fans are as happy as I am to see Jason return for another season. Jason’s scoring record since joining us has been incredible and I look forward to seeing him leading the scoring charts next season.”

Jason’s own and loan shirts are available to order now for £100 each (Home and Away). Please see the Tigers’ Online Shop for details.

In the 2019/20 season, Tigers are again offering individual player sponsorship at £400. The package will include a personalised ‘SPECIAL’ exclusive third jersey with a company name or family name patch, announcements on match nights, a small advert or logo in the match night programmes and a signed player photo.  The jersey will be worn for cup games and play-off games and will not be available as a replica.