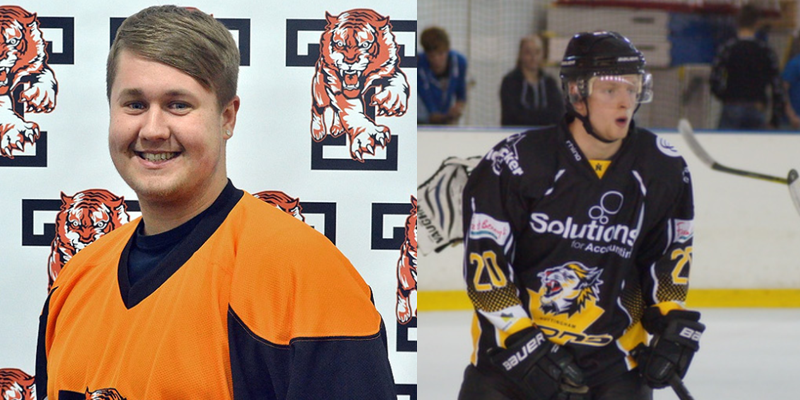 Telford Tigers are delighted to announce the return of two more players for the D2 team for the upcoming season. Forward Callum Griffin and defenceman Conor Gordon have both signed up for another season with the Tigers, and D2 coach Callum Bowley is pleased to have both players on board again. Speaking about 23 yr old Griffin, he said ‘ “I am extremely pleased Griff is back in the line-up for next season. He’s a great person and character in the room, he’s respected by all the lads and more importantly, he’s a player who competes every shift and buys into what’s asked of him. This season, I will be pushing Griff to be more of an offensive threat as he skates well and has a great release, he just needs to be more confident in his ability. It should be a big year for Griff!’

Callum himself was equally happy to be pulling on the Tigers jersey again, commenting “I’m looking forward to the start of the new season with the Tigers. I think it will be a tough league this year with all the new league structure but I think Bowls is building a good team and is keeping a good core group of lads which is important and hopefully it’s an enjoyable season and come the end of the year, we should be battling for a top spot.”

Coach Bowley commenting on the return of 20 year old Gordon said “I am thrilled Conor is back for next season. He surprised me with some of the performances he produced last season and the way he went about his business. He’s not a flashy defenceman but he battles hard and comes to every game giving 100%, which as a coach, it’s exactly the type of guys you want in your line-up. He’s plays a gritty style of hockey and moves the puck up the ice quickly, which is perfect for quick transition from defence to offense and putting opposing teams on the back foot. I’m looking forward to working with Conor and I’m sure he will be a leader within our defensive group.”

As for Conor, he is looking forward to the challenge of the new season, adding “I’m delighted to be spending another season in Telford and hopefully it shapes up to be a very competitive season with how things have changed. I cannot wait to get back on the ice and start the season under Bowls.”