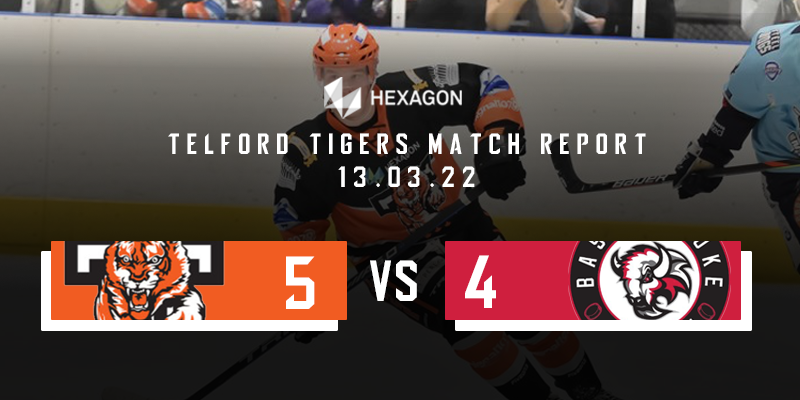 Tigers Claim Vital Home Win. Hexagon Telford Tigers returned to home ice for their latest attempt to end their recent poor home form. Having lost four straight home games, the team were eager to put the recent home form behind them and a win away to Basingstoke the previous day was the ideal way to prepare for the game.

Ross Connolly and Jack Watkins were joined on the sidelines by Scott McKenzie who was unavailable for the game.

The first period went by very quickly with few stoppages. Early on Tigers went close when Alex Mettam in the Bison goal made a save but the rebound was available and Vladimir Luka had two shots from point-blank range but Mettam was able to block them both. Luka was in on goal again shortly after but again Mettam made a good save. Tigers dominated the period and it was no surprise when they opened the scoring. Jonathan Weaver sent a shot from the Bison blue line, towards goal that got the faintest of deflections from Jason Silverthorn to tip the puck past Mettam.

Joe Aston continued the Tigers’ pressure on the Bison goal with a wrist shot that hit the post.

Tigers then had a glorious chance to add to their lead with a 5-on-3 power play after Alex Sampford and Ashley Tait were both called for hooking. As the first penalty expired and Bison gained one player back, Austin Mitchell-King sent a pass across goal which hit a Bison defender and deflected past Mettam to give Tigers a second goal.

There was a moment of controversy in the final minute of the period when Alex Roberts shot low past Day and it wasn’t clear if the puck had gone into the net. Roberts celebrated, thinking he had scored but the officials signalled no goal and Tigers looked to have gained a slice of good fortune.

Early in the second period Tigers added a third goal. Ricky Plant showed great strength to hold off a Bison defender and maintain control of the puck then skate towards goal and hit a wrist shot that went through Mettam and into the goal.  Bison looked bereft of ideas but had a chance to get back into the game with a power-play after Bayley Harewood was given a tripping penalty. Zack Milton scored with a low shot to get Bison back into the game.

Tigers regained a three-goal lead shortly after when Corey Goodison sent a perfectly timed cross-ice pass to Andy McKinney who sent the puck into the bottom corner of the goal. With Tigers cruising they gifted two goals to Basingstoke to give them hopes of a comeback. A turnover allowed Roberts to score with a shot from in the slot which beat Day low down. Then twenty seconds later, another turnover on the Bison blue line allowed Ashley Tait a clear breakaway on goal. Tait shot in off the crossbar to draw the Bison within a goal of Tigers’ lead.

Telford responded perfectly by scoring their fifth goal just thirty seconds after conceding. Harewood won control of the puck in the Bison defensive zone and sent a brilliant backhanded shot over Mettam’s shoulder.

With five minutes of the second period left, Tigers’ Deakan Fielder was called for boarding and given a five-minute penalty. Bison took advantage of the extra man straight away with Roberts scoring his second of the night with a carbon copy of his first goal. Tigers managed to kill off the rest of the penalty with some resolute defending and ended the period with a narrow lead.

The third period was frantic at times and Tigers sought to play out the remainder of the game without conceding further. They had Day to thank on a couple of occasions as the Tigers’ netminder made a couple of terrific saves to deny Basingstoke. With five minutes to go Basingstoke have assessed two penalties, giving Tigers an extended 5-on-3 power play. Despite the numerical disadvantage Basingstoke were looking to steal the puck and break away and once again Day pulled off a terrific save with seconds of the game to go. Tigers saw out the rest of the game and secured a vital home victory and four-point weekend. The lead at the top of the league is now nine points with six games remaining.

Following the game Head Coach Tom Watkins, commented, “It was another big night for us and a crucial four-point weekend in our quest to defend the league title. We started the game very well and for thirty minutes we were dominant at 3-0 up we had additional chances to end the game but some individual mistakes and poor penalties opened the door for the Bison and they took full advantage. The win is the only thing that matters at this point, picking up points means it makes it more challenging for other clubs to catch us. It would be great to see the fans come out and get behind us for the run-in. We need them to turn up in far greater numbers to show support for the team. The next few weeks are going to be crucial for us, we’ve battled hard every night, we compete hard at home and on the road and we appreciate all the support we can get.”

Tags:2021/2022EIHAHexagonHexagon Telford TigersHockeyIceIce HockeyIcehockeyNIHLOneClubTwoTeamsSeasonTelford
previousTigers Make it Four in a Row on the Road
nextDouble title hope for Telford Tigers