Tigers Crash Out of the Cup. 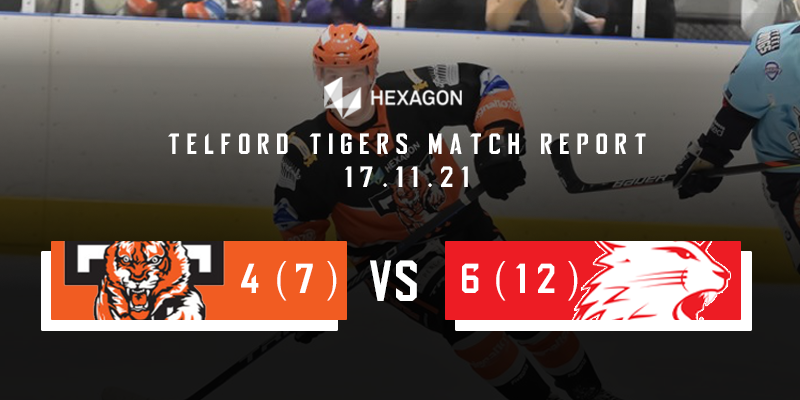 Tigers Crash Out of the Cup. Hexagon Telford Tigers started the second leg of the Autumn Cup semi-final with a mountain to climb after a disappointing first leg performance saw the Shropshire side trail by three goals. Tigers winning league run had reached seven games at the weekend but Swindon held a huge advantage ahead of face-off. Tigers last semi-final game at home in the Cup in January 2020 saw Telford come back from the same deficit against the same opponents, with Tigers fighting back to wipe out a three-goal lead held by the Wildcats and win on penalty shots.

Tigers were without Ricky Plant, Ross Connolly and Jack Watkins for the game.

Tigers needed a fast start and to put pressure on Swindon but the first period was lacking in quality from Tigers and they made the worst start possible. After just 32 seconds Corey Goodison turned the puck over on the Tigers’ blue line with a poor pass that went straight to Tomaz Malasinski who accepted the gift and shot high past Brad Day in the Tigers’ goal to give Swindon the opening goal. Tigers couldn’t get going and spent much of the period chasing Swindon players around the ice. Emil Svec was given far too much time and space in the Tigers’ defensive zone and his shot hit Day and rolled behind him for the second goal of the period for Swindon. Tigers had two power-play chances but barely registered a shot on Renny Marr in the Swindon goal. The game was put beyond Tigers late in the period when Jack Goodchild was unmarked in the slot and shot past Day to give Swindon their third goal and a six-goal aggregate lead, Tigers’ heads were down as they headed to the break apparently beaten with two-thirds of the game left to play.

At the start of the second period, Tigers gave their fans brief hopes of a comeback with two goals in less than a minute. First, Deakan Fielder tipped a Jason Silverthorn shot past Marr to get Tigers on the scoreboard. Then, Austin Mitchell-King scored with a goal from close range after good stickhandling forced a save from Marr, then Mitchell-King scored with the rebound. Tigers then had a glorious chance to get level with a power-play after Swindon’s Floyd Taylor was called for hooking. But, a disastrous power play for Tigers saw Swindon score twice whilst short-handed. Poor defending allowed Chris Jones a breakaway on Day and the Swindon forward scored with ease. Worse followed when another turnover led to Malasinski and Aaron Nell breaking in on Day’s goal again and combining to easily score Swindon’s fifth goal. In just 26 seconds, Tigers hopes of a comeback were once again dashed. With Swindon now back to six goals ahead Tigers created few chances, with too many shots straight at Marr. The final chance of the period fell to Andy McKinney who was sent clear on goal but shot wide.

Tigers finally scored on the power play early in the third period. Silverthorn’s shot was deflected past Marr by Mitchell-King for his second of the night and Tigers’ third. Swindon hit back again and Tigers’ luck deserted them. Silverthorn’s wrist shot hit the crossbar and bounced away allowing Swindon to break and Nell added his second of the night for Swindon’s sixth goal.

Swindon allowed Tigers one final power play when Tyler Plews was called for a cross-check allowing Jack Hopkins to put a small amount of gloss on the scoreboard with a deflection from Danny Rose’s shot. Swindon won the game and the tie comfortably, sending Tigers to defeat and out of the cup.

fter the game Head Coach Tom Watkins, commented, “We’re disappointed with our performance tonight, we shot ourselves in the foot on the first shift and from there onwards it was a sloppy performance that we couldn’t correct. The start deflated us. You can’t make the number of individual errors against a team stacked with talent like we did tonight. They’re a strong team that played disciplined hockey in both legs whereas in contrast I feel we had a group of individuals playing for themselves and it cost us. I’d like to think that’s something we can learn from in future.”