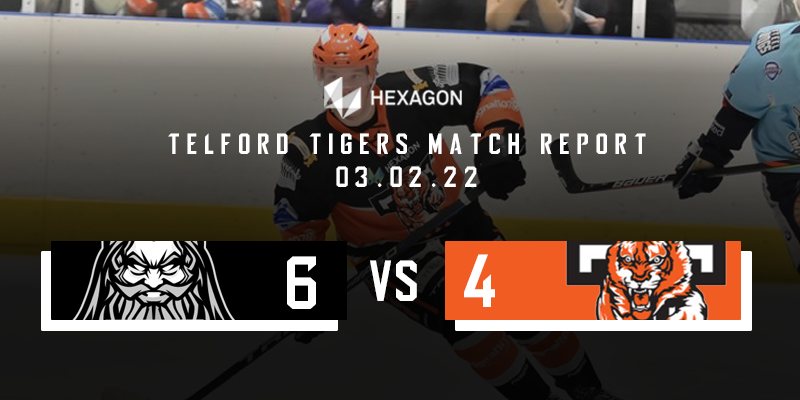 Tigers’ Cup Hopes in Balance. Hexagon Telford Tigers travelled to Milton Keynes for the first leg of the National Cup Semi-Final. Tigers had qualified in second place from the group stage of the competition. Swindon Wildcats had won the group and elected to play third-placed Sheffield Steeldogs, leaving Tigers to face off against the Lightning.

Tigers travelled without Jack Watkins, Sam Watkins and Thomas McKinnon for the game but welcomed back Ricky Plant and Corey Goodison from injury. Tigers also added the in-form Lucas Price from the Tigers 2 team and backup netminder Ryan Lewis.

Tigers took a while to get going in the first period with some wayward passing causing issues. Scott McKenzie had the first opportunity of the game but Matt Smital in the Milton Keynes goal made a good save. Lightning opened the scoring with a goal that will disappoint the Tigers’ defence. Adam Laishram was unmarked at the far post after a defensive mix up allowed Hallden Barnes-Garner to pass to Laishram for a tap in past Brad Day.

Telford hit back four minutes later with great work by Vladimir Luka to intercept a pass on the Tigers’ blue line and breakaway on Milton Keynes’ goal. Smital made a terrific pad save and it looked like the chance had gone, but Luka won the puck back and sent it low past Smital to draw the sides level.

Tigers’ recent issues giving away penalties reared its ugly head again with four penalties in the first period alone. The penalty kill worked well on each occasion and even managed a short-handed goal. Milton Keynes turned the puck over once again and Jason Silverthorn pounced on it, beating Smital to the puck as the netminder came out to play it. Silverthorn calmly shot into the empty net to give Tigers the lead.

Tigers were given a power-play chance early in the second period when Lewis Christie was called for tripping. Telford created plenty of chances and scored their third goal. Ricky Plant sent the puck across the ice to Luka who was waiting with his stick poised. Luka hit a one time slap shot which was so powerful that as he hit the puck, his stick shattered into pieces but the puck still flew past Smital.

Tigers controlled much of the rest of the period and were left kicking themselves after conceding a goal in the final minute to allow Milton Keynes back into the game. Tigers’ defence failed to clear the puck from their zone despite numerous chances and eventually the puck broke to Sam Talbot who rifled a shot past Day to draw the Lightning to within a goal of the Tigers’ lead.

Telford scored the fourth goal in the opening minute of the third period, Bayley Harewood sending a perfect pass from behind the goal for Silverthorn, who drew Smital from the goal and slid the puck low past him into the net.  Shortly after, Brad Day made a couple of brilliant saves to keep the lead intact.

Milton Keynes hit back and scored three goals in five minutes as Telford lost control of the game and the tie.  A poor line change gave the Lightning a chance and James Griffin blasted the puck past Day.  Telford’s luck then deserted them as Weaver’s shot hit the post and rebounded out allowing a Milton Keynes break. With Weaver out of position, Sean Norris picked out the unmarked Bobby Chamberlain to tap home and draw the sides level. Then, Laishram added his second of the game with a fierce shot that gave Day no chance.

With Lightning 5-4 ahead, Tigers conceded what could prove to be a crucial goal with just seconds left, Chamberlain scored his second and Lightning’s sixth goal after more poor defending left Day with no chance. Tigers end the tie two goals behind and considerable work to do in the second leg.

After the game Head Coach Tom Watkins, commented, “We gave up a two-goal lead and they scored four goals and we got one in the third period, I think that says everything about our performance tonight! We played four lines for the most part but still managed to get outworked by their three lines who played with way more energy, desire and hunger, fully deserving to be where they are in the tie. It will be interesting to watch the video back.”