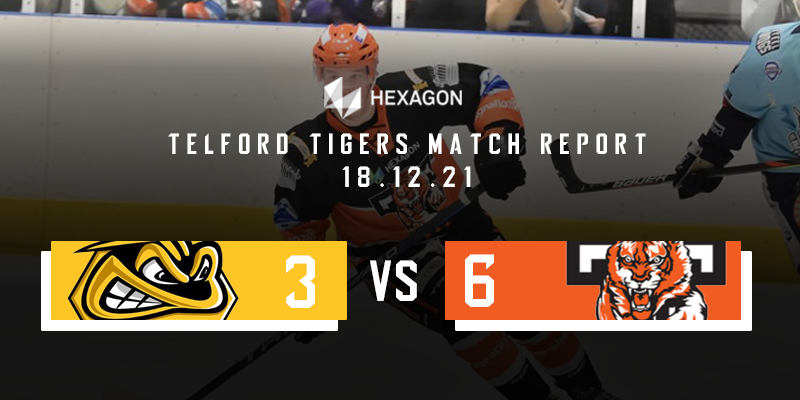 Tigers Dig Deep for Road Win. Hexagon Telford Tigers travelled to Slough to take on Bees for their only game of the weekend. The team were up against it again with eight players unavailable. Ross Connolly, Ricky Plant and Jack Watkins were all out injured. Fin Howells, Jack Hopkins and Sam Watkins were all still away with Great Britain’s U20 squad. Head Coach Tom Watkins was ill and Andy McKinney was banned: the Tigers’ forward receiving an eight-match ban for a check to the head in the defeat to Leeds the previous weekend. With so many players unavailable, Tigers were delighted that captain Jason Silverthorn declared himself fit after missing the previous game through injury and Dan Mitchell was also added to the line-up.

With both teams short benched, the game was end to end and full of goals. Tigers opened the scoring in the third minute. The puck broke to Silverthorn at the side of the net, allowing him to take control and skate past the goal and lift the puck over the prone Adam Goss in the Bees’ goal. The lead lasted less than a minute, however. With Silverthorn in the penalty box for tripping, Bees’ Ryan Webb shot wide of the Tigers’ goal and the puck bounced favourably off the backboards allowing Dominik Gabaj to tap home past Brad Day.  A penalty strewn period ended with Bees’ Niklas Ornmarker given a tripping penalty, allowing Tigers to end the period ahead. Deakan Fielder sent a pass from behind the goal to the unmarked Vladimir Luca who buried the puck past Goss to put Tigers back in front.

Early in the second period, Luca doubled his tally for the game and gave Tigers their third goal. Scott McKenzie sent a pass out of the Tigers’ defensive zone to Luca who skated in on goal unopposed and beat Goss with a neat stickhandling move, lifting the puck over Goss who had reacted by Luca faking a shot and dived the wrong way.

Tigers’ play became sloppy as the period progressed and they conceded two goals in quick succession. Ornmarker benefitting from a lucky bounce off a Tigers’ defender allowing him to tap in from close range. Then, a shot from Webb hit Corey Goodison’s stick and deflected past Day to draw the sides level. But, Tigers ended the period ahead. A shot from Goodison from long-range appeared to be tipped past Goss by Fielder who was stood just in front of the Bees’ goal, but the goal was awarded to Goodison for the initial shot.

Tigers started the third period giving away too many penalties and spent the opening half of the period killing off the penalties. As the game entered the final ten minutes, Tigers scored their fifth goal. Luca advanced up the ice and waited for the perfect moment to send a pass across goal to Fielder who deflected the puck home.  Tigers put a gloss on the performance with a sixth goal a minute from the end of the game. With Bees’ Josh Martin in the penalty box for boarding, Bees pulled Goss from the goal to add an extra attacker but this just allowed McKenzie a free shot from his own defensive zone, into the empty net to seal Tigers’ win.

After the game, Tigers’ Assistant Coach Steve Molineux, commented, “It was our last weekend game before the Christmas break and we had players missing, injured and away on international duty. We had our head coach not able to travel but still managed to get the win.

The team had to dig deep and we went into the last period ahead, knowing we needed to take the two points after taking none last weekend. They pressed us hard but we held on and secured the win which we deserved.  The performance and result will give us confidence now for our midweek game against Sheffield and hopefully, we will have more players available.”