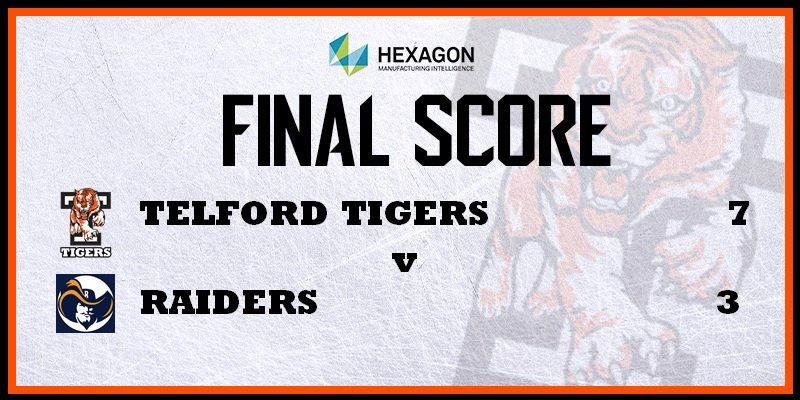 Tigers’ Double Delight with Championship Title Victory.  Hexagon Telford Tigers took on Raiders in the NIHL National League at Telford Ice Rink.   Tigers came into the game fresh from their National Cup victory over Peterborough Phantoms and knew that a single point from the game would give them the league title with two games to spare. That or a Swindon loss in Peterborough would see the Shropshire side crowned as league champions. Ahead of the game, a number of teams had games called off due to concerns over the Covid-19 virus, with only games held in Telford and Peterborough being played. Huge credit should be given to the Raiders players, coaches and fans for making the trip to Telford to fulfil the fixture.

Tigers were able to ice a full roster with Thomas McKinnon returning from suspension and only James Smith unavailable. Tigers started with Brad Day in goal, Raiders started with Michael Gray in goal, playing his final game before retirement.

Prior to the game, it became apparent that Raiders had forgotten to bring their team jerseys with them so they had to play whilst wearing Tigers’ home white jerseys with Tigers switching to their away black shirts!

Tigers dominated the opening moments of the game and opened the scoring in the fourth minute. Raiders lost the puck in their defensive zone, allowing Brandon Whistle to take possession and find the unmarked Scott McKenzie in the slot. McKenzie hit a wrist shot that was too powerful for Gray and it flew into the goal. Tigers added a second goal shortly after with a carbon copy of the first goal but this time McKenzie passed to the unmarked Whistle who beat Gray with a low shot.

As the period progressed, Tigers continued to dominate but were grateful for a terrific block by Corey Goodison to deny Raiders. The final minute of the period gave Tigers’ their first power play of the evening after Lukas Sladkovsky was called for slashing.  Jason Silverthorn won the subsequent face-off allowing Jonathan Weaver to hit a precise wrist shot through Gray’s legs for Tigers’ third goal to give the team a lead their performance deserved.

Raiders came out for the second period and looked a different team, pressuring Day’s goal from the first whistle and deservedly scored with a goal from Aaron Connolly.  Tigers’ nerves were set on edge shortly after when Brandon Ayliffe netted a goal to draw the Raiders within a goal of Tigers’ lead. However, Tigers rallied and scored the fourth goal after a goalmouth scramble saw McKenzie’s shot blocked but the puck landed perfectly for Whistle to tap home his second of the game. Tigers continued to attack freely and added a fifth goal with a superb finish from Silverthorn. The Tigers’ captain firing a wrist shot over Gray’s shoulder into the top left-hand corner of the goal. With the pressure easing, Tigers added a sixth goal with Ricky Plant tapping home a rebound from Weaver’s shot.

Midway through the third-period news from Peterborough circulated around the rink, with the Phantoms comfortably beating Swindon 10-3, the only team who could prevent Tigers from winning the title. It was clear that the championship belonged to Telford. The fans chanted “Champions” and the players were able to celebrate on the bench.   On the ice, Jake Pitchley scored with three minutes to go to give Raiders a third goal. Tigers had the final say on the scoreboard with a goal in the last thirty seconds of the game. Dominik Florian setting up Andy McKinney to seal the victory from close range. Tigers celebrated at the final buzzer as a memorable week for the Tigers sees them win the NIHL National League championship and National Cup and completes the double for the Shropshire team.

After the game, Head Coach Tom Watkins, commented, “ What a week for the club, two trophies, a league and cup double. It’s a fantastic achievement, we have a great team on and off the ice.

Yesterday was a strange situation with so many of the other games cancelled, we are very fortunate that we were able to play the fixture which gave us the opportunity to win the league in front of our fans. For that, we are very grateful to John Scott, Sean Easton and all the Raiders players and staff for their professionalism. They are a massive credit to their club.

It’s been a great league season, one that I’ve enjoyed immensely, the competitiveness of the league throughout all the teams has been excellent. We’ve worked tirelessly all season, from day one and have been in first place I think since October. To be the team setting the pace adds some pressure, not least when you have to play without key players week in, week out, but as a team, every player stepped up to the challenge and played their part. We showed a lot of composure when we had a bit of skid and dropped some points allowing the gap to tighten but the difference has been the performances and results against Peterborough and Swindon. We’ve played our best hockey and really stepped up in those big games, sweeping both clubs along the way. To me, that’s been the difference.

I would like to say a huge thank you to all the fans, sponsors and club volunteers that have supported us all season and been part of the journey to pick up two titles. It would be fantastic to be able to continue this into playoffs and take a run at a playoff championship, I truly believe this team have the character and commitment to go further but for now, nobody is sure of what is next. Please stay safe and thank you once again.”

Hexagon Telford Tigers 1 & 2 will next be in action at home soon, dependant on updates from the EIHA about the Covid-19 virus. Match Night tickets will be available to purchase here!