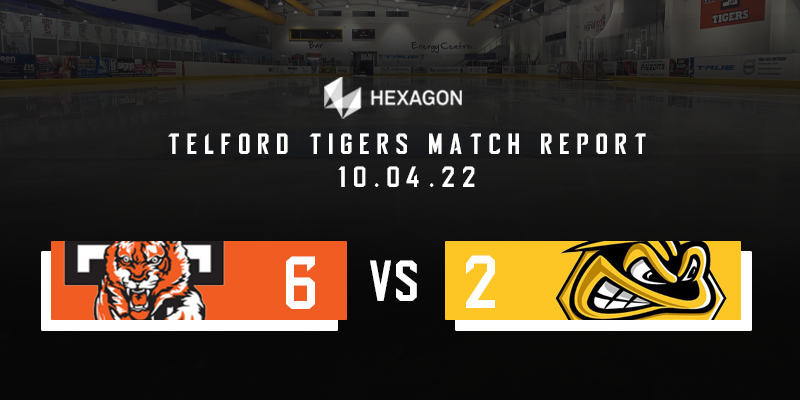 Tigers Double Playoff Victory. Hexagon Telford Tigers opened their playoff campaign with a 6-1 victory over Bees and returned to home ice to try to make it a double victory over their visitors from Slough. Tigers’ recent form had been exceptional coming into the game with six straight victories.

Tigers were able to ice a full roster with the exception of Ross Connolly who was injured and Jack Hopkins who was still away with the Great Britain U18 team.

The start to the game saw both teams have chances and Telford were indebted to Brad Day early on as the Tigers’ netminder made a point-blank save from Josh Smith. Shortly after, Austin-Mitchell King was sent clear on goal but his effort was well saved by Adam Goss.

A breakthrough goal came in the fifth minute. A shot from the blue line by Danny Rose beating Goss who was screened by his own defenders. Bees were trying to make the game a physical affair and James Galazzi was given a penalty after slashing Scott McKenzie’s stick and breaking it. Tigers went close on the resultant power play but could not score.

The home side’s defending was sloppy towards the end of the period and they paid the price when they failed to clear their zone and a shot from Will Stead hit Day and trickled through into the net to draw the sides’ level.

Tigers hit back straight away, just eleven seconds later! Sam Watkins won the puck at centre ice and entered the Bees’ defensive zone and sent a pass to Andy McKinney who fired the puck into the open net to put Tigers back in front.

The second period opened with the third goal for Tigers. Sam Watkins worked hard to keep the puck in the Bees’ defensive zone and the puck was cycled around the boards for Watkins to shoot at Goss who made the initial save but Fin Howells was on hand to score on the rebound. Tigers added a fourth goal midway through the period. Sam Watkins was again the provider, sending Vladimir Luka in on goal. Luka stickhandled past two Bees’ defenders and hit a backhanded shot over Goss. With Bees looking tired, Tigers added a fifth goal. Telford were already on a power play when the officials called a delayed penalty allowing Day to leave the goal to add an extra attacker. Mitchell-King took full advantage tucking home a pass from Bayley Harewood into an open net to put Tigers firmly in control of the game.

Tigers added a sixth goal midway through the third period. Howells forced a save from Goss and Brodie Jesson was on hand to put the rebound into the roof of the net from close range. Bees scored a late consolation goal, Zaine McKenzie shooting low past Day to give Bees a second goal.

Tigers’ win gives them a four-point weekend and sees them make a perfect start to the playoffs.

After the game Head Coach Tom Watkins, commented, “It was a good start to our playoff push and a solid 4 point weekend. We were dominant at times, wave after wave of offence and again I thought we took our goals at the right time taking the momentum away from a team that just doesn’t quit. Credit to the Bees – they were banged up with a few key guys missing or carrying knocks but they competed extremely hard on both nights. It was important to not only pick up the points but also to come through the weekend healthy.”