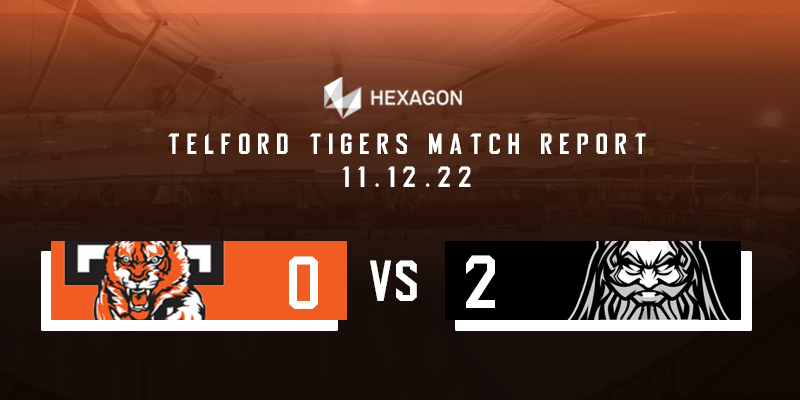 Tigers Draw Blank As Winless Run Continues. Hexagon Telford Tigers faced off on Sunday evening against Milton Keynes Lightning at Telford Ice Rink, desperate to break a six game losing streak. Tigers salvaged a point in their previous game after pulling three goals back in the last five minutes against Hull before losing in overtime.

With Milton Keynes in third place this would be a test for a Tigers team low on confidence.

Once again it would be the opposition who scored first despite Tigers having the majority of possession in the opening five minutes of the game. Tim Wallace set up Sam Talbot for a shot into an open net after Brad Day had lost position in his goal.

With Tigers behind, luck deserted them again. With Sean Norris in the penalty box for Milton Keynes. Danny Rose’s shot was blocked on the blue line by Liam Stewart and bounced behind Rose allowing Stewart a breakaway on the Tigers’ goal. Stewart shot low past Day to give the Lightning a second goal.

Tigers had considerable possession time on the puck during the second and third period with , netminder Jordan Hedley by far Milton Keynes’ best player. Scott McKenzie, Jason Silverthorn and Ricky Plant all went close but Hedley was in unstoppable form.

Tigers spent the last two minutes of the game with an empty net after pulling Day from the goal to add an extra attacker but Milton Keynes defended resolutely and Hedley completed a shut out and was named Lightning’s man of the match as Tigers slumped to a seventh consecutive defeat.

Man of the match: Deakan Fielder.

After the game Head Coach Tom Watkins commented, “It was a disappointing night for the team and the fans. We played well, played hard and did everything but score and kept a good team on their heels for much of the game. Defensively we were solid, created chances and stuck to our process which is something we haven’t done of late.”