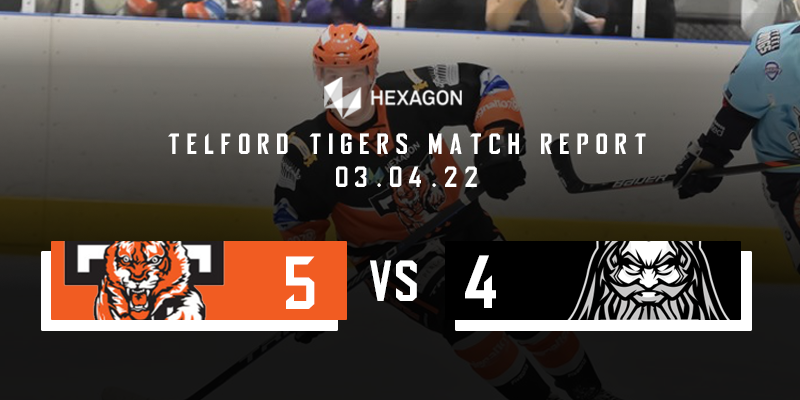 Tigers End League Season on a High. NIHL National League champions, Hexagon Telford Tigers played their final league game of the season in what was a double celebration of both Telford teams’ title-winning success.

Tigers started the game without Ross Connolly and Jack Hopkins who was away with Great Britain’s U18 team. Andy McKinney was unable to return to the lineup and Lucas Price iced after his man of the match performance the previous evening.

Milton Keynes started the game in fifth place and were unable to climb in the league standings regardless of the result and Tigers already knew they would be facing Milton Keynes in the group stage of the playoffs.

The atmosphere at the start of the game was quite flat. With both teams effectively playing for pride, the game felt like a dead rubber. Hallden Barnes-Garner went closest for Milton Keynes, drawing a pad save from Brad Day. Tigers went even closer when Austin Mitchell-King hit the post but the opening period ended goallessly.

Tigers opened the second period with the first goal of the contest. Ricky Plant sent a wrist shot in on goal which was saved by Matt Smital in the Lightning goal, but the rebound landed perfectly for Scott McKenzie to tap home. Within five minutes the lead had been doubled. Jason Silverthorn scored with a wrap-around goal.  Tigers then had a goal ruled out after McKenzie was ruled to have hit the puck with a high stick – a call that was very close. As the period ended, Milton Keynes pulled a goal back after Sean Norris received the benefit of a lucky deflection off Jonathan Weaver’s stick allowing him a breakaway which he scored with a low shot to give Milton Keynes hope.

Tigers made a poor start to the third period. Bobby Chamberlain equalised with a low shot to Day’s right and then a Tim Wallace shot was tipped past Day by Ben Russell to give Milton Keynes the lead.

Tigers hit back with a goal after a dominating shift from Silverthorn, Bayley Harewood and Austin Mitchell-King. The three forwards penned the Milton Keynes defence in their own zone. Silverthorn won the puck in front of goal, waited until Smital was out of position and shot past him to draw the sides level.

Milton Keynes regained the lead with a huge piece of fortune after a Tigers’ attempted clearance hit Sam Talbot on the leg and deflected past Day.

With the game entering the final stages, Telford gained a power play after Russell Cowley was called for hooking. Vladimir Luka’s shot was saved by Smital but the puck broke kindly for Fin Howells to score into an open net and draw the sides level again.

With Telford applying pressure to the Lightning goal for a winner, the pressure finally paid off in the final minute of the game. Jonathan Weaver’s shot was blocked by Smital’s pads but McKenzie was on hand to slam the rebound into the net and seal a terrific comeback for the league champions and another four-point weekend. The win sees Tigers end the league campaign with five wins in a row. With the final games complete, Telford win the league by ten points from runners up Swindon Wildcats.

Tigers progress to the group stages of the playoffs and will play Leeds Knights, Milton Keynes Lightning and Bees in Group A over the next three weekends.

After the final buzzer, the National Division championship and the Laidler championship teams were awarded their medals and the captains of both teams – Jason Silverthorn and Michael Jones – were presented the league trophies in front of the sell-out crowd to celebrate a remarkable day in the history of the club.

After the game Head Coach Tom Watkins, commented, “It was good to be able to finally celebrate the league win and I was pleased to see the players enjoying themselves together. They’ve all earned that success and deserve a huge amount of credit. They’ve played with huge grit and determination every night and I couldn’t be prouder of what we have achieved in winning the league with several games to spare and by 10 points. In such a competitive league that is remarkable. It is evident the players really enjoy what they are doing and as a group are as close a team as I have ever coached. It is a great environment and time spent in the dressing room, the bus journeys, the practices, the times the fans don’t see and the camaraderie is very special, we have had great fun along the way.”