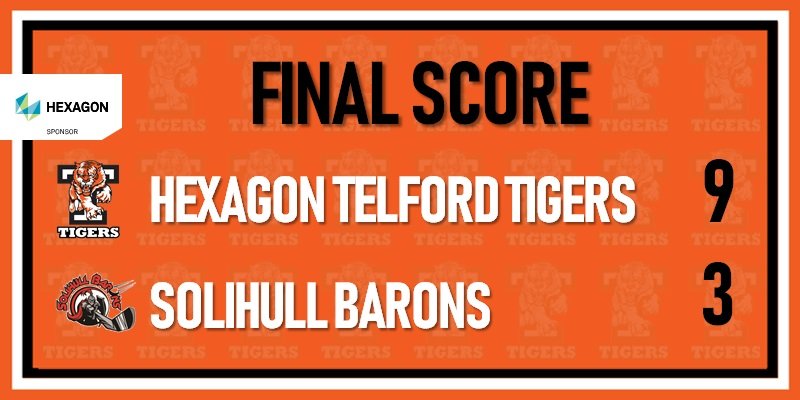 Tigers End Season With Derby Win. Hexagon Telford Tigers 1 played the final league game of the season at Telford Ice Rink on Sunday night against local rivals Solihull Barons. Tigers had lost 6-3 the previous evening against Hull Pirates, ending their title challenge and leaving the team finishing third in the league for the second successive season.

Tigers added Alex Blake, Dan Mitchell, Jed Moreland, Henry Adams and Ryan Lewis as back up net minder to the line up. Starting in goal for Telford was Tom Hovell and in goal for Solihull Sam Hewitt.

Tigers were dominant throughout the first period and opened the scoring in the 3rd minute of the game. Jack Watkins’ shot was saved by Hewitt but the rebound fell nicely for Brodie Jesson to tap in the first goal of the game. Tigers scored again a minute later when Mitchell passed to the unmarked Moreland in front of goal to score from close range. Tigers were threatening with every attack and scored a third goal when Brodie Jesson shot from the right circle and Hewitt saved the shot but was prone on the ice, allowing Jason Silverthorn to collect the puck, skate around him and apply the finish. In the 10th minute, Mitchell made a big hit behind the Solihull goal on Solihull’s Marcus Maynard causing him to turn the puck over to Jack Watkins who fed the puck to Warren Tait in front of goal to fire home the fourth goal. Watkins then scored the fifth of the night with a shot through the legs of Hewitt. As the period reached the final minute, there was still time for one more goal. Jonathan Weaver getting the final touch to a Jack Watkins’ pass across goal.

Just thirty three seconds into the second period, Solihull got on the score board with a goal from Niklas Ottosson. Tigers responded with a seventh goal – Mitchell tapping in from Joe Aston’s pass. Tigers then scored two quick goals, both scored by U18 player Fin Howells. First he applied the finish to a pass from Ricky Plant, then scored shortly after with a shot into an empty net after being set up by Scott McKenzie. The final goal of the period was scored by Solihull’s Adam Brittle to leave the score 9-2.

Tigers’ coach Tom Watkins made a number of changes to the lines in the third period, giving extended ice time to some of the younger and less experienced players. Back up net minder Ryan Lewis was given the last ten minutes of the contest in goal. The period was a scrappy one and saw the only goal of the period scored by Solihull’s David Rogers.

Hull Pirates beat Sheffield Steeldogs 8-3 in Sheffield to win the title leaving Tigers tied with Sheffield on 64 points but finishing in third place due to Sheffield having a better head to head record over Telford.

After the game coach Tom Watkins commented, “Two points to finish our league season off was a priority tonight and with us facing the Barons again next weekend in the first round of playoffs the result was important to us. We started well with a strong first period and from there were able to take our foot off the gas. We’ve had some very intense and important games of late so to remove some guys out of the line up tonight and rest them was hopefully a big plus for us down the playoff stretch.”