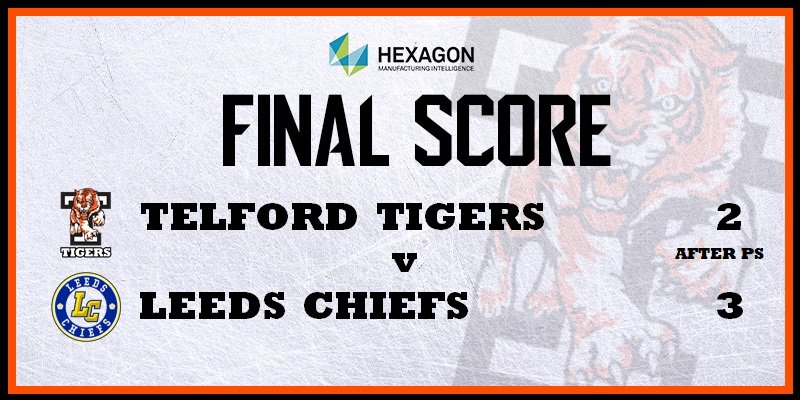 Tigers’ Fall Short in Shoot-Out: Loss Hexagon Telford Tigers played bottom of the league Leeds Chiefs on Sunday night at Telford Ice Rink. Tigers had lost their previous two games and had seen their lead at the top of the table cut to five points after Tigers had lost to Hull and Swindon had beaten Milton Keynes in overtime on Saturday. The game against Leeds represented Tigers’ game in hand over Swindon so it was vital that the team responded with a win.

Andy McKinney was still suspended and was joined on the sidelines by Jonathan Weaver, James Smith and Nick Oliver.

Tigers made a bright start to the game, Dominik Florian hitting the crossbar with the first attack of the night. Five minutes into the period, Leeds’ Patrik Valcak took a tripping penalty giving Tigers an early power play. Tigers made the most of the extra player when Corey Goodison’s shot from the blue line was deflected past Gospel by Fin Howells to give Tigers the lead.

Leeds threatened occasionally on the break and equalised midway through the period. Tigers’ defence got caught out pinching in at the blue line, leading to a 2-on-1 breakaway. Adam Barnes passed to Valcak and the Leeds’ forward tapped home past Day to draw the sides level.

The second period was close and Tigers were a little disjointed. Referee Brooks drew the ire of the crowd when he completely ignored a blatant cross-check by Valcak on Adam Taylor, despite being a yard away and looking straight at the infraction. Tigers’ penalty kill was working well and both Danny Rose and Scott McKenzie made terrific blocks whilst Dan Mitchell was serving a holding penalty. Late in the period, Tigers took the lead, Jack Watkins hammered a shot which rang off the crossbar and bounced down into the goal crease. Watkins was first to the rebound and slammed the puck into the open goal.  But just sixteen seconds later, Leeds equalised.  Joe Coulter was unmarked in front of goal and was found with a pass from Liam Charnock. Coulter beat Day to score Leeds’ second goal and send the sides into the break level at 2-2.

Tigers started the third period with just over a minute and a half of power-play time after Valcak was given a slashing penalty in the final seconds of the second period. Leeds killed off the penalty, with McKenzie and Ross Kennedy going close for Tigers. Despite lots of pressure on the Leeds goal, there were no further goals during the period meaning the game would go to overtime.

Tigers had constant pressure throughout overtime and had a glorious chance to win the game with a power-play when Lewis Baldwin took down Brandon Whistle when he was in on goal. Despite having the majority of possession in the Leeds’ offensive zone, Tigers could not score, sending the game to a shoot out. Leeds went first and scored through Lewis Houston. McKenzie’s shot was saved by Gospel and was followed by a goal from Barnes for Leeds. Florian had to score to prolong the shoot out, his first attempt was saved but then retaken after Gospel was adjudged to have moved too early. The second attempt hit the crossbar, handing victory to Leeds.

Tigers gain a point and extend their lead at the top of the table to six points ahead of second-placed Swindon Wildcats.

After the game Head Coach Tom Watkins, commented, “It was a tough night: flat performance, flat atmosphere and we didn’t have the jump we have played with for much of this season. We did have some opportunities not least in the overtime period when we had a 4 on 3 power play. I don’t think we got a puck to the net in that situation and didn’t move it quickly enough which was frustrating.

We still got a point, which could be very important in the bigger picture. It’s important we stick together, focus on the process and get behind each other. It’s my job to get the atmosphere back at practice this week and promote the belief in the group. This is a good group of players who have put the team in the position we are in and I have a huge amount of faith in them all.”

Hexagon Telford Tigers 1 will next be in action at home on Saturday 25th, January against Hull Pirates. Match Night tickets available to purchase here!