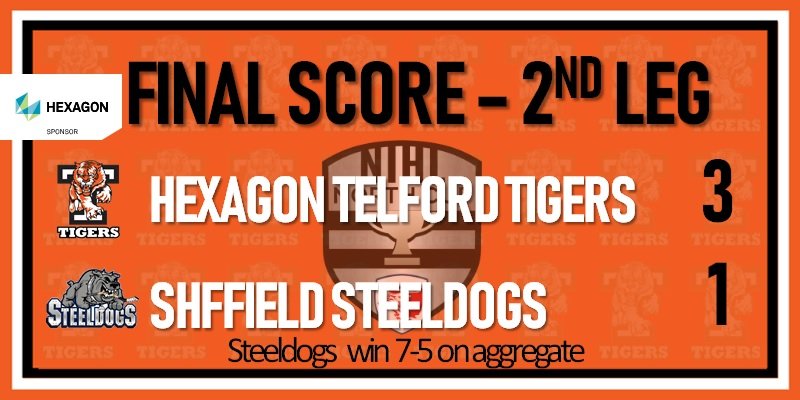 Tigers Fall Short of Cup Final Comeback.  Hexagon Telford Tigers 1 faced off against Sheffield Steeldogs on Saturday night in the second leg of the NIHL North Cup. Tigers had lost a demoralising first leg on Friday 6-2 and came into the game needing a much improved performance to stand any chance of a comeback to win the cup.

Tigers were able to add James Smith to the line up along with Jed Moreland, Alex Blake, Fin Howells and Callum Bowley. Tigers also added Slough Jets’ net minder Matt Smital to the roster after receiving dispensation from the league to play him due to Tigers’ lack of available net minders. Smital has experience playing for Swindon Wildcats and Bracknell Bees. Sheffield starting net minder was Dimitri Zimozdra.

Ahead of the game coach Tom Watkins had commented, “I think the guys are very keen to get going this evening. The team showed a great desire in the third period last night. It’s in our barn tonight and as I said last night, this tie is far from over.”

Tigers started the game in much better fashion than the previous evening, with several players laying down a marker with big hits. Tigers were pressuring the Sheffield goal, Warren Tait went close with a long range shot and Smith forced Zimozdra into an early glove save. Just like in the first leg in Sheffield though, luck was against Tigers. Corey Goodison’s attempted clearance from alongside the Tigers’ goal hit a Sheffield player and bounced into the path of the unmarked Nathan Salam, who scored to give Sheffield the lead on the night and a five goal aggregate lead. The period ended with Tigers having a mountain to climb to get back into the tie.

The second period saw a Tigers’ fightback that gave the almost capacity crowd hopes of a sporting miracle. First, Joe Aston equalised from close range to level the game and then Scott McKenzie netted for Tigers with a powerful shot that went through Zimozdra to give Tigers the lead on the night. As the period reached the final few seconds Jonathan Weaver scored with a stunning shot into the top corner from a tight angle to give Tigers a 3-1 lead on the night and reduce Sheffield’s aggregate lead to two.

Tigers continued their dominance in the third period and Sheffield’s goal was living a charmed life. Tait shot from close range – the puck tickling past Zimozdra towards the goal line and was inches away from going in before it was cleared. As the game entered the final five minutes, Tigers were presented a glorious opportunity to get the two goals needed and take the game into overtime, when Sheffield’s Ben Morgan and Nathan Salam were awarded cross check penalties, meaning Tigers would have a five on three power play. Despite having constant pressure and numerous shots, the puck would just not go in. Every shot seemed to find a Sheffield player blocking it or Zimozdra making a save. Sheffield killed off the penalties and saw out the game to win the NIHL North cup.

After the game Tom Watkins commented, “What a great game of hockey tonight. We lost the tie last night in the first two periods but showed we wouldn’t go away without a fight. I’m proud of the guys tonight, we played with huge heart and desire – desire I haven’t seen from this group before. We were physical all night, We took the game to Sheffield for 60 minutes tonight but were guilty of not burying some good chances or capitalising on our five on three late in the game, but credit to them they bent but didn’t break.

Watkins added, “I thought Callum Bowley and James Smith did a great job for us tonight and looked very comfortable stepping up to play in a final which had a lot of pace.

Matt Smital was simply outstanding. He looked very comfortable, composed and calm under pressure, stepping up a league and being thrown in to a tough situation. He gave us a platform on which to build and have us a chance to win. We couldn’t have asked anymore from him and are very grateful to the Slough Jets.”

Hexagon Telford Tigers 1 return to play at Telford Ice Rink Sunday 10th March 2019 at 18:00 in the crucial NIHL Moralee Conference against game against Sheffield Steeldogs. Hexagon Telford Tigers 2 are next in home action at Telford Ice Rink on Sunday 9th March 2019 at 19:00 in the NIHL Laidler Conference against Altrincham Aces. For details of all future fixtures, check out the Tigers fixture list and www.telfordtigers.net/tickets for ticket information.