Tigers Fall to Shoot Out Loss 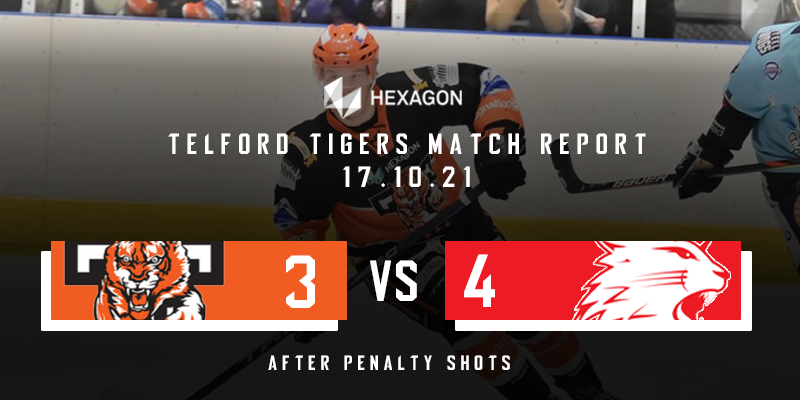 Tigers Fall to Shoot Out Loss. Hexagon Telford Tigers opened their defence of the NIHL National League title with a home game against the team that was their main rival for that championship – Swindon Wildcats. Tigers didn’t play the previous day so found themselves facing a Wildcats team who had already played and lost their opening game.

Tigers were without key defender Jonathan Weaver who needed more time to recover from a nagging groin injury.

The first period was a scrappy one with both teams struggling to create meaningful chances. Tigers had an extended 5-on-3 power play with Emil Svec and Sam Godfrey in the penalty box for Swindon. Despite considerable possession in the offensive zone, Tigers did not cause much trouble to Dean Skinns in the Swindon goal. However, as the second penalty ended Tigers opened the scoring with the only goal of the period. With Swindon not yet back to full strength and Godfrey making his way out of the penalty box, the puck was fed to Corey Goodison who was stood in the right circle. The Tigers’ defenseman smashed the puck into the top left-hand corner of the goal, with Skinns having no chance to stop it. Tigers held the lead at the break.

Swindon had the better of the second period with Tigers fighting a rearguard action for much of the period. Early on, Svec hit the side of the Tigers’ goal and then a Chris Jones shot stuck the post. Finally, the pressure told as Tomasz Malasinski scored to draw the sides level. The Swindon player skating around the back of the goal and sending a shot high into Brad Day’s goal.

Swindon continued to press and struck the post again with Tigers penned in their defensive zone for long periods. Tigers needed some pressure of their own and were given a golden chance late in the period when Godfrey was called for an interference penalty. Tigers, used up most of the power-play time and scored just before the penalty expired. Fin Howells and Andy McKinney combined to send Jack Hopkins in on goal and the youngster buried the puck past Skinns with a low wrist shot to put Tigers ahead and score his first goal for the club.

Early in the third period, Swindon were level. A defensive mistake saw two Tigers’ defenseman skate into each other, gifting the puck to Swindon who recycled the puck and Godfrey got the final touch from close range to draw the sides level. Swindon then took their first lead of the night with a shot from Malasinski that bounced off Day’s blocker and looped behind him into the net. Despite their best efforts, Tigers couldn’t force many chances and the game looked to have slipped away but a late goal saw the game head to overtime.  Scott McKenzie pressured Swindon’s defence and managed to force the puck towards Nick Oliver who was in the slot and blasted a slap shot past Skinns to draw the sides level.

Tigers had the best of the overtime period with McKinney having the best chance but Skinns made a terrific save to force a penalty shoot-out.

In the shoot out, both netminders proved difficult to beat with only Austin Mitchell-King scoring for Tigers but this was cancelled out by Aaron Nell’s successful shot. With Skinns saving Scott McKenzie’s shot in the 8th round of the shoot out, Swindon’s Reed Sayers won the game, shooting low past Day.

Tigers gain a point in the standings, despite their opening game loss.

After the game Head Coach Tom Watkins, commented, “It was a very tough game. In the first period, I thought we started very well, created chances and got a goal up and made it difficult for Swindon in the offensive zone. The second period was the polar opposite, Swindon really established a strong forecheck, won battles and races, were first to lose pucks and created a lot of good chances where we established little pressure but I was relieved to end the period ahead.

We played a much better third period but we still gave up a soft goal and had some good chances ourselves and I thought we perhaps could have won in overtime and in the shootout. That said I thought we got more than we deserved in securing a point. Swindon were the better team on the night.”